Top 10 Most Controversial Fashion Magazine Covers Of All Time

The relationship between the fashion industry and the socio-politics of the world has commonly been seen as mutualistic. Over the decades, designers have drawn inspiration from the present times and formulated collections centered around what people are talking about lately. On the flip side, pioneers and protesters have used fashion as a tool to create subliminal messages and in some cases solidify their messages.

But while that can be the case for the pioneers and protesters, they’re still at the mercy of fashion magazines, who are the moderators at the helm of this relationship. It’s understandable when we consider how fashion paired with journalism holds the power to reflect the times, but also influence change (negatively or positively), especially in terms of making impressions on upcoming generations.

Even with all of that grand power, not all publications make an effort to take a step and spark conversation. Some choose to not worry about the fear of negative reception, or offer unparalleled aesthetics, rather they choose to go beyond the boundaries by providing covers that create viral dialogue around the negative or positive impacts that they carry.

There have been many of those instances over the decades, but here are what we consider the most controversial ones of all time. 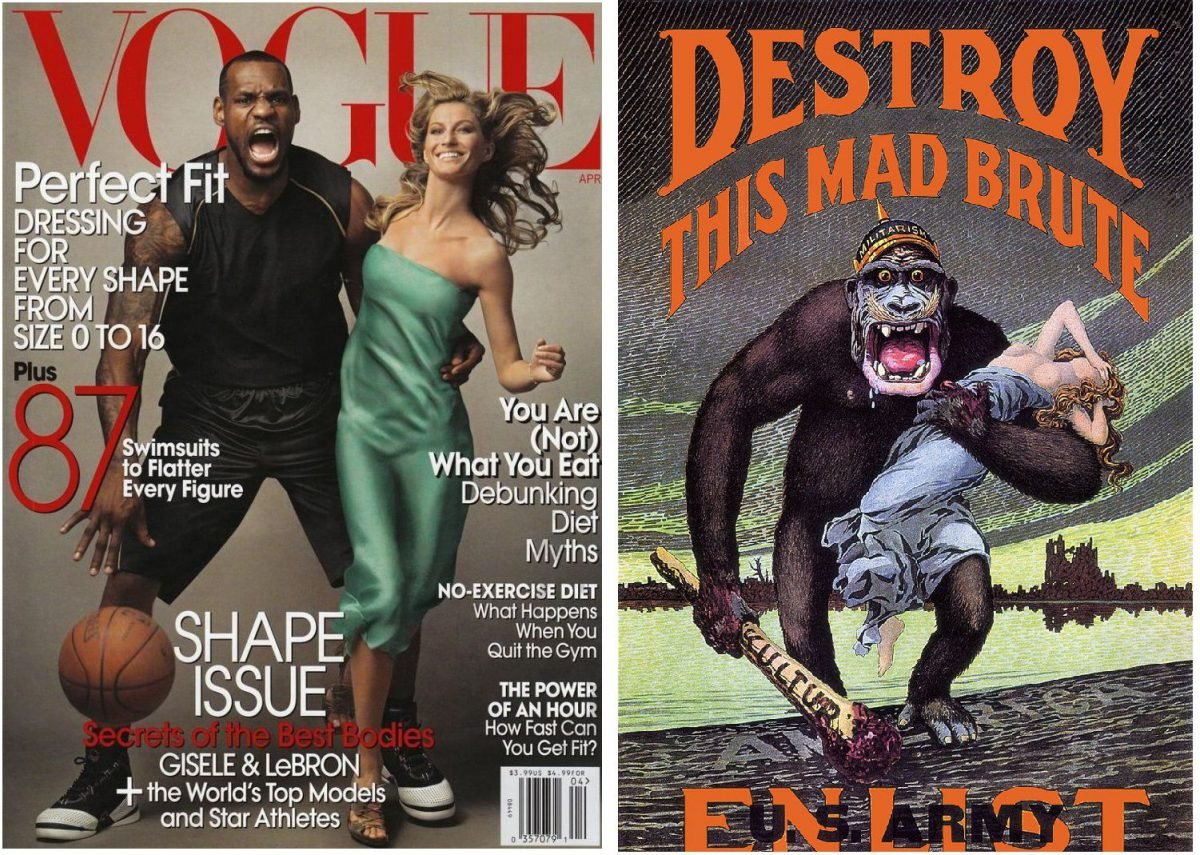 For the first time in its history, American Vogue decided to put a black man on one of its covers. This honor fell to the world-renowned basketball player LeBron James. He was paired up with the Brazilian model Gisele Bundchen. While it’s nice to finally see a black man on the cover, the image stirred some criticism that got people thinking twice about the cover.

LeBron on the cover was pictured with his face in an almost ape-like growl while bouncing a basketball with one hand. His other one was holding the waist of a smiling Miss Bundchen.

This stirred up so much controversy because it’s similar in design to the famous image of King Kong clutching the form of then actress Fay Wray.

Despite the outcries over this, the magazine never made an official statement. We’re simply left arguing over the significance of this. Some say the intent was racist, while critics say based on the level of care devoted to the covers of American Vogue, the selection was deliberate. Furthermore, considering this is the top fashion magazine in the world, the argument of intent is often irrelevant when compared to impact. 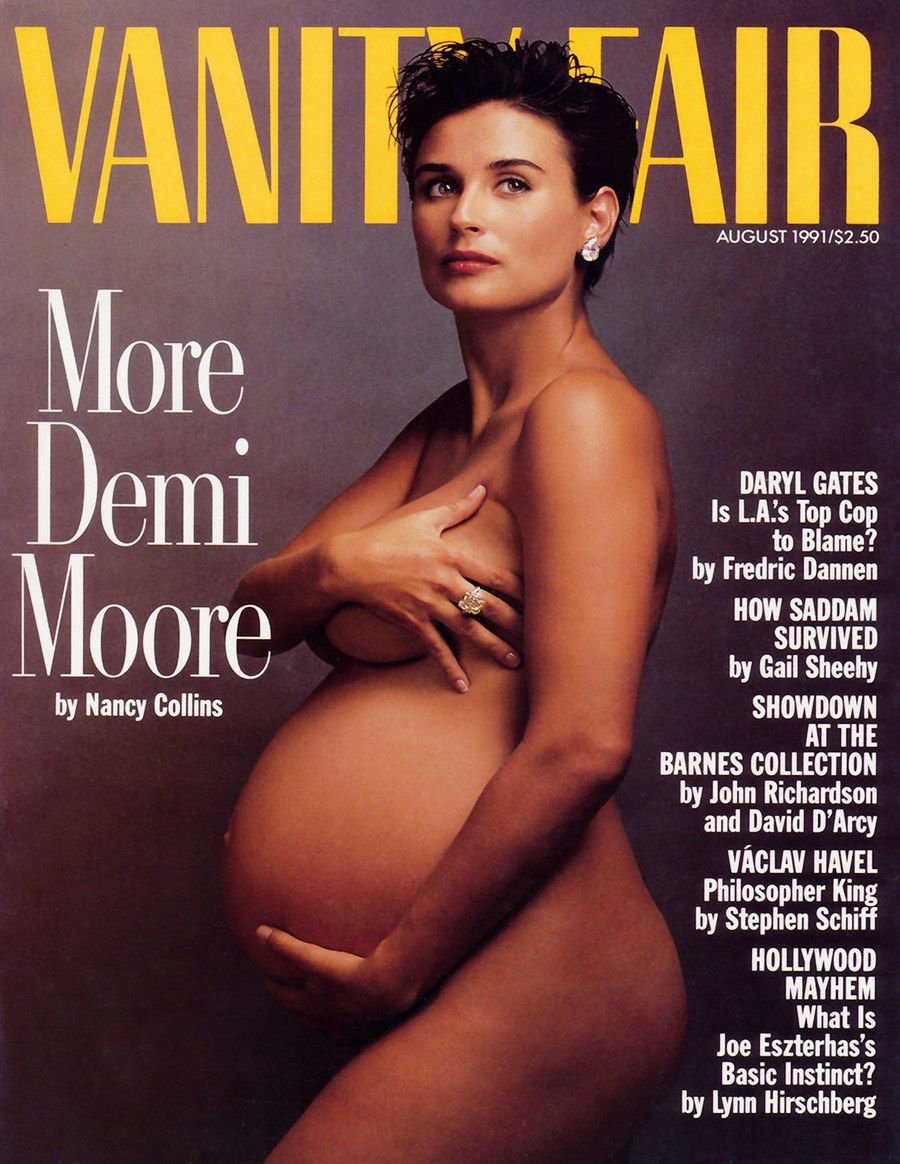 Society has changed a lot and what was not acceptable back then may be fine now.

Nevertheless, this particular edition of Vanity Fair sparked a lot of controversy at the time.

Seeing the actress Demi Moore on the cover posing nude while being seven months pregnant quickly became a point of ridicule for the actress. At the time, she was 28 years old and married to actor Bruce Willis and bearing her second child. She posed naked with one hand holding her breasts and the other right under her bump.

These days, this sort of posing wouldn’t be categorized as scandalous, however as the copies of these magazines were sold out of newsstands and supermarkets, many stated this issue was provocative and borderline pornographic.

Then Vanity Fair editor Tina Brown was shocked as well about the attention this cover drew, commenting that she didn’t expect the cover to be talked about on every radio, TV, and newspaper outlet let alone the entire world.

Demi Moore was equally surprised by all this as well stating, “I was stunned at some of the negative responses. That people found it pornographic, or they thought it wasn’t family-oriented. I think it’s so interesting that they’ll have other nudie-type magazines out there, but the fact that I was pregnant would all of a sudden be something that isn’t family.”

Since the start of that cover, it’s sparked a movement of conversation and imagery on shifting our attitudes and thoughts on sexuality and even pregnancy.

Franca Sozzani, the previous editor-in-chief of Vogue Italia wasn’t one to be afraid of pushing the boundaries of what’s acceptable. In July 2008, she created one of the most historic issues in fashion history: all black models appearing on the cover during the time where race was still a massive issue in fashion.

The first run of this issue was sold out in the US and UK within 72 hours of its release and stores were urging the publication to print another extra 30,000 copies.

As successful as it would seem, not all of the feedback was positive of course. The Guardian writer Priyamvada Gopal claimed that black women had little to gain from a stunt like this.

She wrote: “This is a black girl as a white girl: all aquiline noses, large eyes, oval faces, hair coaxed into silky straightness or carefully turned away in shot after shot. By simultaneously marking blackness as “special” and yet ensuring conformity to dominant (white and European) ideas of sophistication and beauty, the “black issue” tells us a great deal about race and ethnicity in the media today.”

What she raised are valid and necessary points indeed. The cover itself wasn’t exactly perfect, however, it’s a case that American Vogue ran into around that time – it was very effective in starting a conversation around the topic.