Every Electric Vehicle That’s Expected in the Next Five Years

Each year, the number of new all-electric cars and SUVs grows. In addition, pricing is getting more competitive, and many electric cars have much more range than they did in the past. However, there are still some exceptions. For example, the Mini Cooper Electric Hardtop has only 110 miles of range, but it’s also the cheapest fully electric option on the new car market today.

Unlike the polarizing hybrid and electric cars of yesteryear, most of today’s EVs look much like conventional cars, and some folks would argue that some electric cars are actually more stylish than typical gas-powered vehicles. 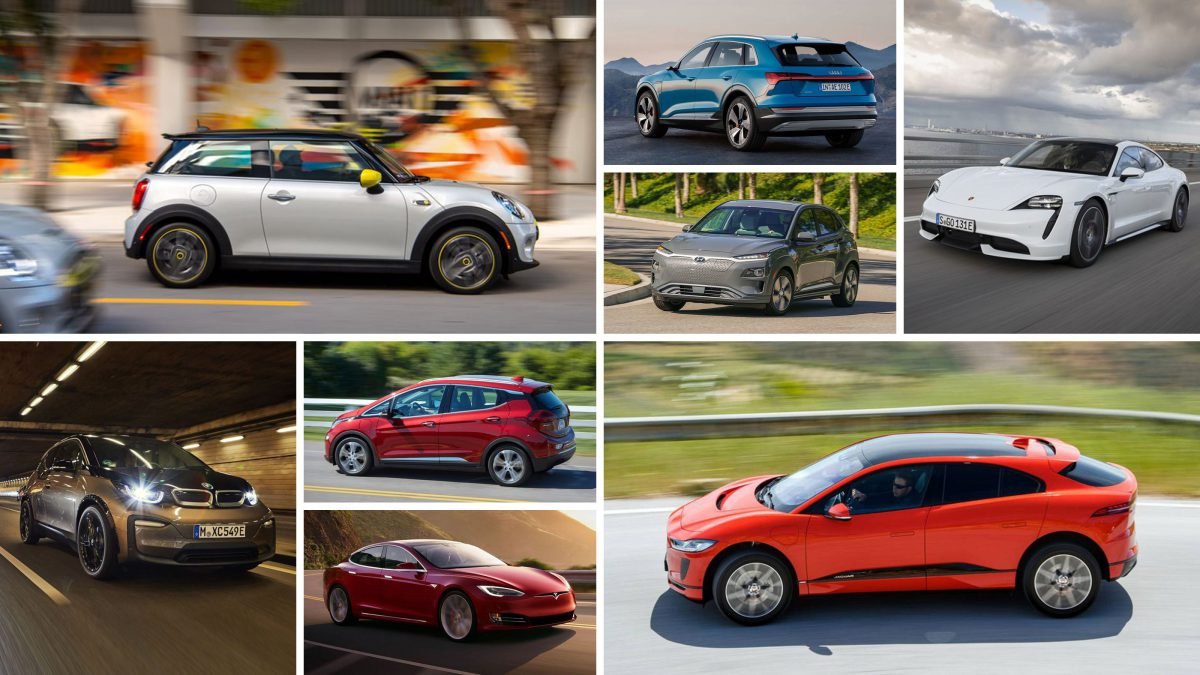 Finally, electric cars have fewer moving parts than gas cars, and almost no fluids to change. This means that in addition to saving money on fuel, you’ll likely also spend much less money on maintenance than you would if you bought a gas car.

We’ve pored over our rankings to find every new battery-electric car with a starting price of around $50,000 or less. However, most of the cars on our list have an MSRP between $30,000 and $40,000. Keep in mind, electric cars qualify for a U.S. federal electric vehicle tax credit of up to $7,500, though not all models are currently eligible. Be sure to check with a tax professional to learn about how the credit works before you close a deal.

Jaguar’s first electric vehicle is now in its second year of sales. The I-Pace competes with the Tesla Model X but costs considerably less. Jaguar offers three trim levels—S, SE, and HSE—and they all get the same 90.0-kWh lithium-ion battery pack and two electric motors, producing a heady 394 horsepower and 512 pound-feet of torque. All-wheel drive is standard. Although the Jag’s 76-MPGe rating isn’t much to brag about, its 234-mile range is respectable. That it can hit 60 mph in less than five seconds makes it one of the quickest EVs out there. It’s also family friendly, with seating for five, 25 cubic feet of rear cargo space, and a small front trunk.

The Audi e-tron Sportback is a sharper version of the larger standard e-tron, that’s been carved into something sleeker. The five-passenger two-row electric SUV is heavyset, hitting the scales at 5819, almost 100 pounds heaver than our long-term Ram 1500, but it’s quicker. A 5.1-second zero-to-60-mph is possible from it’s 402-hp combined output from both motors. Much of that weight is obviously in the 86.5-kWh lithium-ion battery pack. The e-tron Sportback’s EPA-estimates are slightly under the standard version, with an estimated range of 222 miles on a single charge. There’s also an available towing package that allows either e-tron 4000-pounds of maximum towing.

Audi’s five-passenger electric SUV has a second version, the standard e-tron, with broader shoulders allowing for more cargo space. It’s nine inches longer than the Q5. A sizable 95.3-kWh lithium-ion battery pack and two electric motors generate a combined 355 horsepower and 414 pound-feet of torque. Put the transmission in Sport mode, though, and output jumps to 402 horsepower and 490 pound-feet briefly. All-wheel drive is standard. Unfortunately, the Audi’s 78-MPGe rating and 222 miles of range aren’t that impressive, but it can hit 60 mph in a claimed 5.5 seconds, so it’s quick as well as comfortable. There’s also plenty of rear cargo space and a small trunk up front.

After years of teasing, Porsche’s new Taycan (pronounced TIE-kahn, not TAY-can) is the brand’s first EV as well as the market’s first true head-to-head rival for the popular Tesla Model S. The four-seat sedan is also the most expensive and least efficient car on this list, but its desirability is off the charts thanks to extreme performance, sexy design, and a luxurious interior. Currently, every Taycan features all-wheel drive and two powerful electric motors. Porsche offers three models—the 522-hp 4S, the 670-hp Turbo, and the 750-hp Turbo S—but don’t let those names throw you. The Turbo and Turbo S aren’t actually turbocharged like the brand’s gas-powered models, such as the Panamera Turbo and 911 Turbo S. Again, every Taycan is strictly battery powered. The Taycan 4S has an EPA-rated range of 222 miles, while the Turbo and Turbo S offer a little less.

Not only is the Volvo XC40 Recharge Volvo’s first fully-electric vehicle, it’s also an all-wheel drive compact crossover with two motors that produce a combined output of 402 horsepower. Volvo claims it can do a zero-to-60-mph launch in 4.7 seconds. A 75-kWh battery pack provides those motors with the juice, and keeps this peppy electric crossover with an EPA-estimated 208 miles of total range. Thanks to a frunk cargo area the XC40 Recharge has more spaces to store things versus to the gas-powered XC40 with 20 cubic feet of storage behind the second row. When compared to other models with similar range, like the Audi e-tron and Jaguar I-Pace, the XC40 is a much more affordable option.

The Polestar 2 looks more ordinary than insane, which was sort of the whole point behind the company’s first EV, and sort of the whole style of minimalistic Scandinavian design. On the inside however, things are hardly normal. The standard Polestar 2’s guts are vegan—no, seriously. No animal products were used to make it. The Polestar 2 is the first car to use Google’s Android operating system, so its 11.2-inch infotainment touchscreen should look especially familiar to those with Pixel smartphones. Its minimalist looks highlight its varsity athlete performance. The 2 can get to 60 mph in just 4.1 seconds, a tenth-of-second behind our long-term Tesla Model 3. During our real-world highway-range test, the 2 could only last 190 miles before it’s battery went empty, putting it behind the Model 3 once again. It’s a fun stylish EV, but where it exceeds in driving and modern tech, it lacks in overall battery range.

This is the largest and most expensive SUV on this list. It’s also the only seven-seater. Famous for its dramatic falcon-wing back doors, the Tesla Model X has been around for five years now, and it hasn’t changed much in that time. Tesla is currently advertising two trim levels: the Long Range Plus and the Performance. Both feature all-wheel drive and two electric motors, and they boast more than 300 miles of range. An industry-leading infotainment system, the largest touchscreen in the business, and breathtaking acceleration are also part of the Model X’s appeal. Tesla says the Long Range Plus will hit 60 mph in 4.4 seconds, while the Performance will snap your neck with a time of just 2.6 seconds. Only the Porsche Taycan and Tesla’s own Model S sedan can keep up with the X.

Volkswagen wants to sell one million EVs by 2023, and the ID.4 is where they’ll start in the U.S. 1st Edition ID.4 models are already sold out. They come with 20-inch wheels, a 12.0-inch infotainment touchscreen, and a rear-mounted motor that makes 201 horsepower. The ID.4 Pro is the starting trim, with the same standard rear-drive motor as the 1st Edition. A 302-hp dual-motor all-wheel-drive drivetrain is coming later in 2021 for $3601 more. The EPA estimates the ID.4’s 82kWh battery pack can power it 250 miles between charges, putting it near other SUVs like the Kona Electric and Mustang Mach-E.

Just because it doesn’t have the growl of Mustangs before it, doesn’t mean the Ford Mustang Mach-E can’t run wild. The upcoming GT Performance Edition has 634 ft-lbs of torque, nine more than the 760-hp supercharged V-8 Shelby Mustang GT500. During our testing with the dual-motor 346-hp Mach-E Premium AWD, we hit 60 mph in just 5.1 seconds, putting it just a tenth-of-a-second behind the Mustang 2.3L High Performance. So despite the dog and pony show about names, we’d say the word Mustang fits this EV well, and it’s certainly wildly better looking than that thing they made in 1973. And for those keeping track, the 15.5-inch vertically oriented touchscreen is half an inch larger than the Tesla Model Y.

Mini has been in and out of the EV business. This year, it’s back in, with an updated version of its electrified Mini Cooper. The small front-wheel-drive hatchback is powered by a single electric motor mounted under its hood that generates 181 horsepower and 199 pound-feet of torque. The battery pack is under the floor, which gives the Electric a low center of gravity and preserves its cargo space. Three trim levels are offered with prices starting just over $30,000, but its 32.6-kWh battery pack is small, so range is limited to just 110 miles. Aside from radically styled asymmetric three-hole wheels—and, if you want, Energetic Yellow trim—it looks basically like every other Cooper, both inside and out. Mini even left the hood scoop in place. And it runs like a Mini, with athletic handling and a 60-mph sprint of about seven seconds.

Now in its second generation, the Nissan Leaf has never been very sexy, but the compact five-door hatchback has been around for decade, and it’s one of the best-selling electric vehicles in the world. A full redesign last year toned down the model’s clumsy styling and increased its range. Two versions are now offered: the basic Leaf, with a 40.0-kWh battery pack, and the Plus, which costs about $7000 more. The Plus gets a 62.0-kWh battery pack for radically more range and a more powerful electric motor for better acceleration. Range jumps from 149 miles to a very respectable 226. Both versions of the Leaf are front-wheel drive and offer spacious cabins and a long list of standard and optional technologies, but it’s not as fun to drive as its main rival, the Chevrolet Bolt, nor can it go as far on charge.

There were EVs long before the Model S, but Tesla’s sedanlike hatch is the vehicle that proved that an efficient, fast, and attractive electric will not only sell, it’ll go for big money. Introduced way back in 2012, the Model S remains as appealing as ever, from its sleek muscular styling to its minimalistic interior. Its performance is still ahead of the industry that it dragged, kicking and screaming, into the EV business. Tesla has made improvements over the years, cranking up the hatchback’s acceleration and range. Today, Tesla offers the Model S in either a Long Range Plus or a Performance trim. The latter will cost you $20,000 more. Both have all-wheel drive, two electric motors, and adjustable air suspension, and both are incredibly quick. Plus, the S offers the best range in the biz, up to 373 miles.