These 25 Snacks Are Sure To Bring Back Your Childhood Memories

What are the few things that come to your mind when you reminisce about your childhood? We can bet that no one would be able to finish answering that without mentioning the best prank they played and obviously a ton of snacks. Who doesn’t enjoy snacking anyway? They are delicious, serve as a good pastime and come in different flavors to satisfy everyone’s taste buds. As kids, we would skip a meal or two (much to the disappointment of our parents) to gorge on snacks and now that we have grown up we just can’t do it that often. Well, snacks aren’t the healthiest of foods and many of our favorites are no longer produced and sold.

In this list, you’ll find 25 such snacks which you must have savored in your childhood and still look for whenever you visit a grocery store. 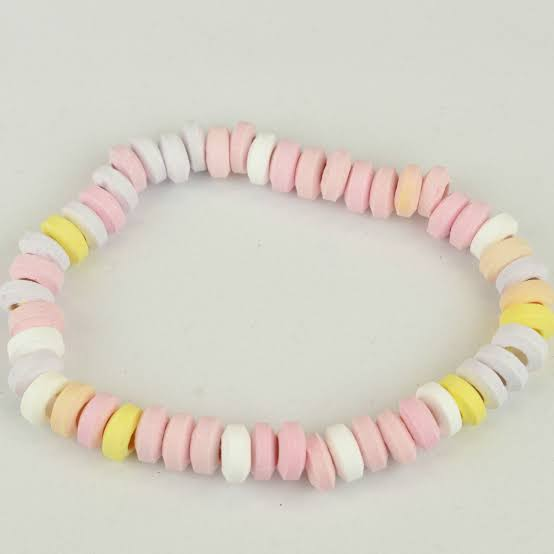 This is something that kids of this generation will find extremely hilarious and also unbelievable. In the ’90s even some of the boys could wear necklaces without being made fun of. Hold on, we aren’t talking the real jewelry here. We are talking about the necklaces made of sweet-sour candies. 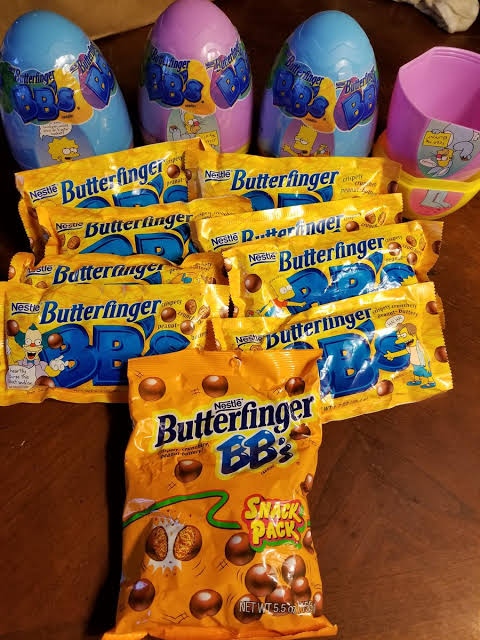 We are glad that Nestle continues to produce its Butterfinger bars in one form and under one name or the other till this date. These yummy tiny balls are just what we need to transport us some 20-30 years back.

Whose else’s mouth watered upon seeing its advertisement in The Simpsons? 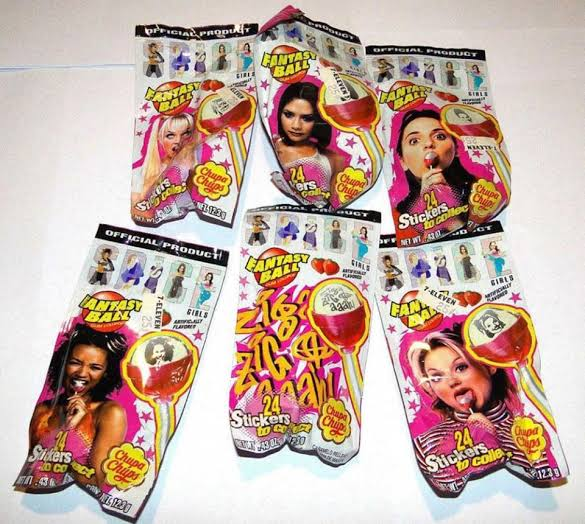 The Chupa Chups sold earlier were pretty good and liked by many. But when this Spice Girls Chupa Chups made it to the market, there was no lollipop that it was second to. With the picture of Spice Girls and a free sticker, it became every kid’s first preference in no time. 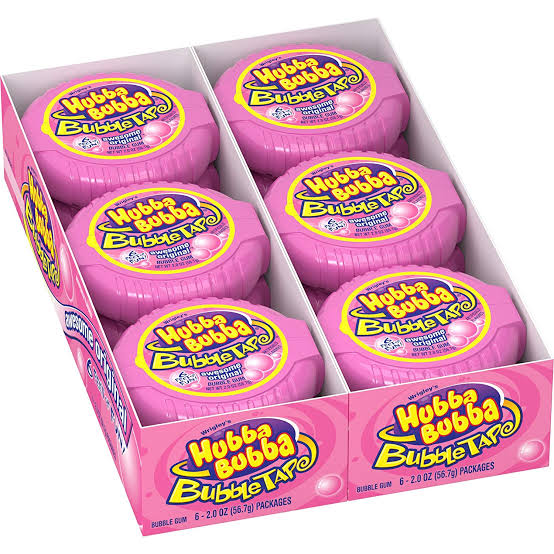 Bubble gums are an integral part of everyone’s childhood. How else would we have the biggest bubble-blowing competition? This 6 feet long Hubba Bubba bubblegum used to be the right pick to warm up, and also to nail such challenges. These have been in the market for about 40 years and are sure to stay for many more years. 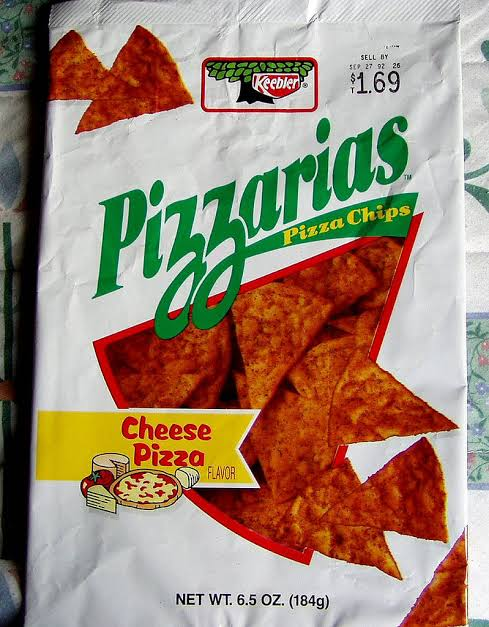 Pizza is one food item one can never have enough of. Just the aroma of melted cheese and oregano is all it takes to fill our mouths with water and make us feel hungry like wolves. However, our parents wouldn’t let us have them as often as we liked. Thankfully, Pizzarias Pizza Chips were there at our rescue and provided respite from midnight pizza cravings. Kids of this generation have to settle for pizza-flavored Pringles which are no match for Pizzarias Pizza Chips. 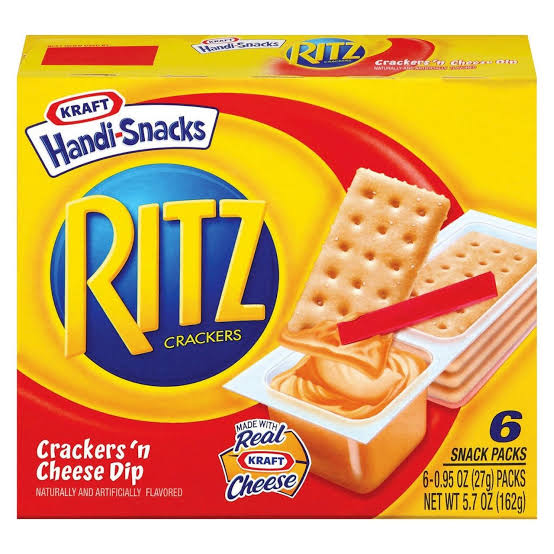 Cheese is one magical ingredient that has in it to make any boring dish appetizing for kids. These bite-sized, crunchy sandwiches called Ritz Crackers were the next thing we turned to in case Pizzarias Pizza Chips couldn’t satiate our hunger for cheese. 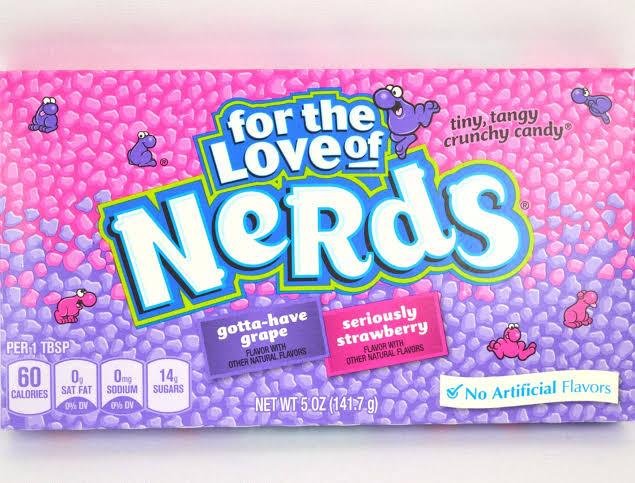 What is the first thing that popped into your mind when you read this word? Obviously, not the nerdy classmates you had in school. Right? Are you too missing this crunchy, sugary snack you used to eat as a kid? Well, then rush to your nearest grocery and get yourself a pack. Yes, it is still available. 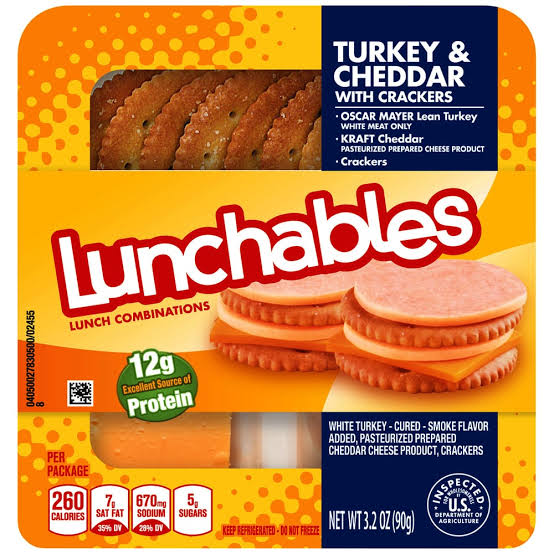 What do you like having for lunch? Hot dog? Pizza? Or a burger? Lunchables offered 26 different meal combinations to choose from. Could life get any better? 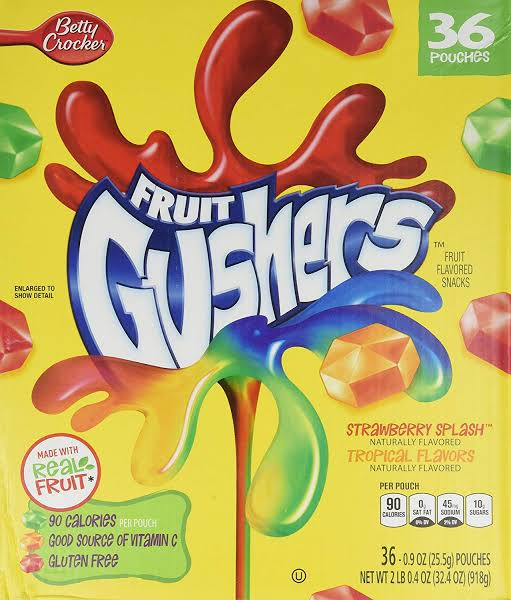 Fruit Gushers were hexagonal pyramid-shaped snacks and comprised mainly of fruit extracts and sugar. When you would bite into one, all the fruit juice would come gushing out to give you the feel of you being in a food paradise. 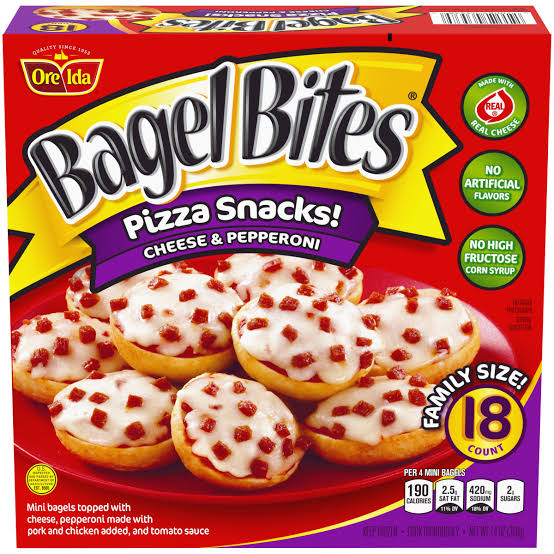 “Pizza in the morning, Pizza in the evenin’, Pizza at suppertime! When pizza’s on a bagel, You can eat pizza anytime!”

Did these lines ring a bell? You guessed it right. We are talking about Bagel Bites. Okay, we know you are about to order yourself a pizza since Bagel Bites have long gone into oblivion, but we recommend you read the rest of the article and then decide what you want to have. 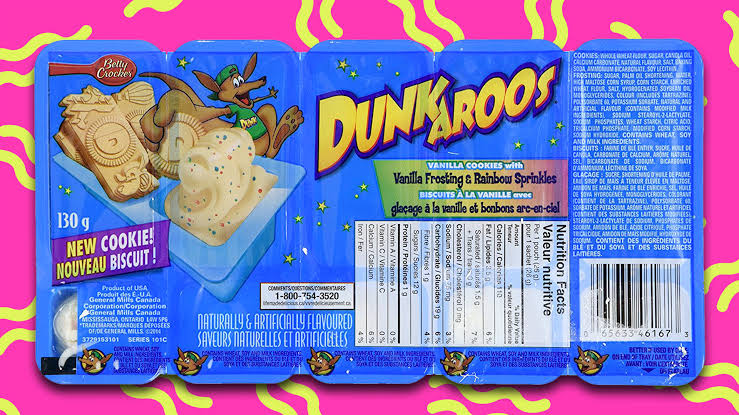 Betty Crocker is someone whom everyone who was a kid in the 90s would forever be thankful to. She is the one behind many famous snacks, including Dunkaroos. These were small cookies, which required to be dunked in icing before being consumed. 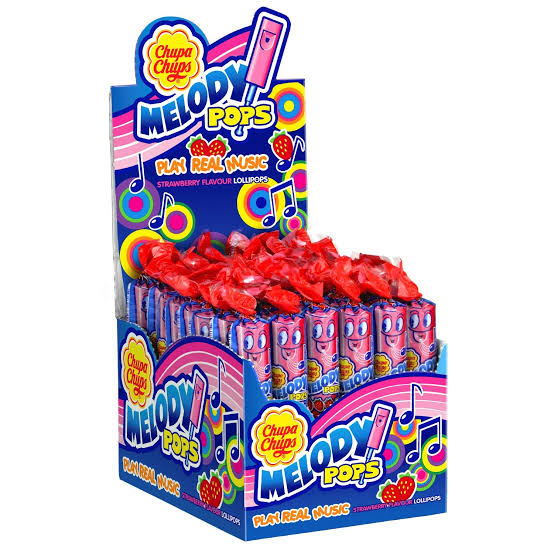 Whistle Pops was something that combined the deliciousness of a lollipop with the fun of a whistle. Kids would use these to annoy their siblings and pets. After being discontinued for a while, Chupa Chups brought them back to the grocery stores under the name of Melody Pops. The newer version was advertised with the tagline: “play real music.” 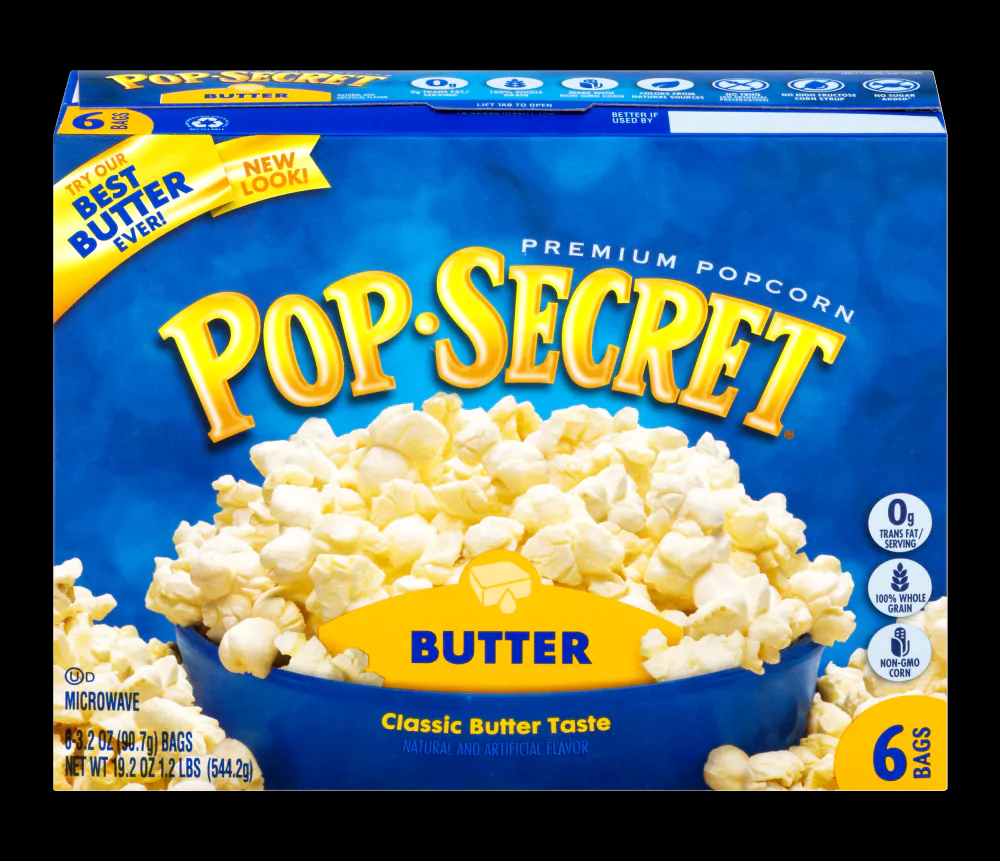 Popcorn is a go-to snack when you are either watching a movie or doing anything monotonous. It is crunchy, buttery, and light on stomach. But the taste of Pop-Secret popcorns is a notch higher. They are just the right amount of buttery, and salty that you can have a big bowl of them and still want more. One box has six packs and you will be out of them in one night if you have no hold on your cravings. 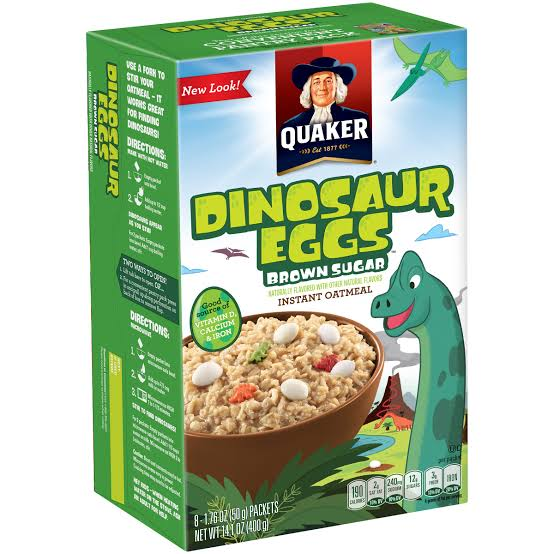 Though oatmeal isn’t something kids would have without whining, Dinosaur Egg Oatmeal was an exception. It had tiny eggs that would melt to unravel sugary edible dinosaurs. This is something that made them every child’s favorite thing to have for breakfast. Added to that, it had brown sugar, which is much healthier as compared to the white one and could be prepared in mere 5 minutes. 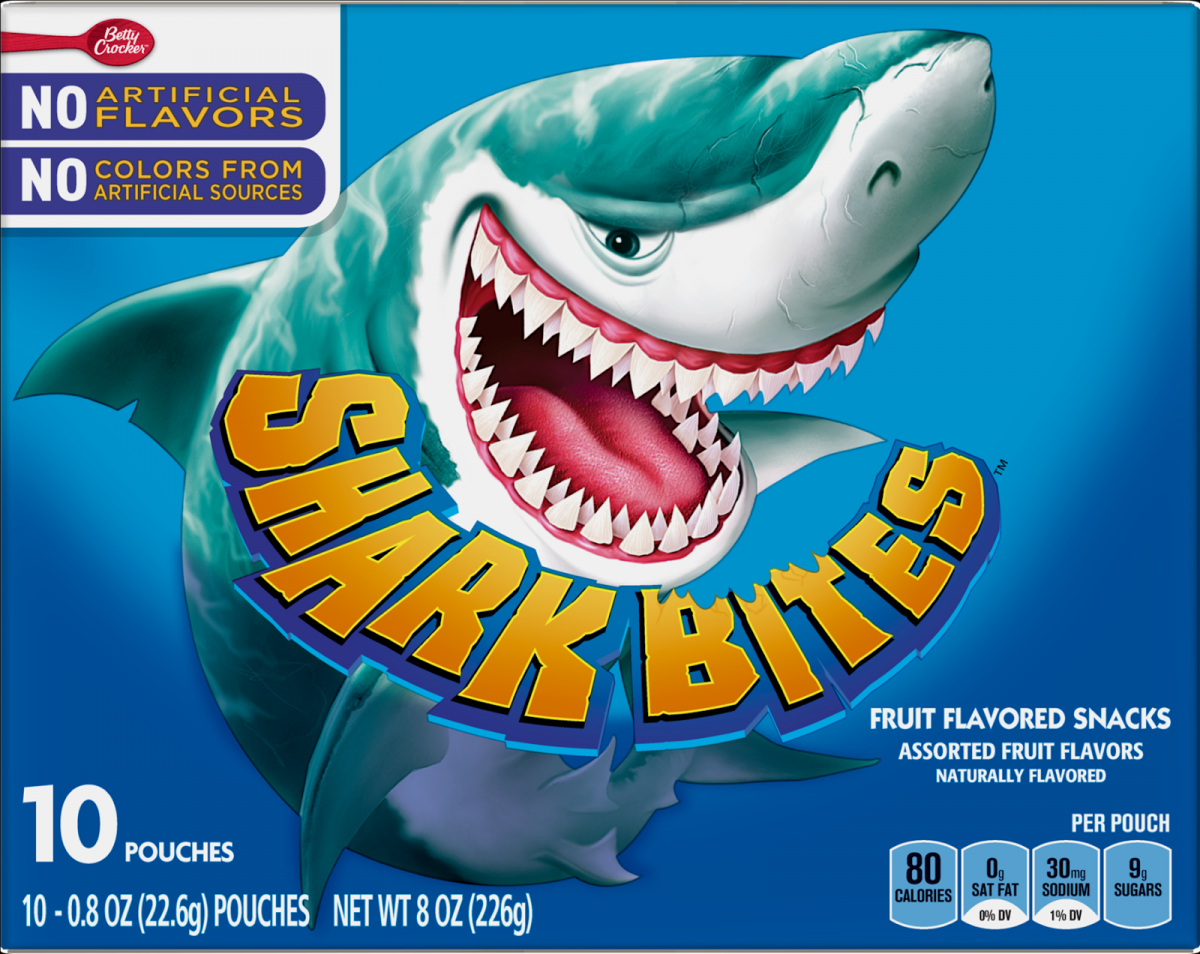 Shark Bites were colorful, sweet, fruit-flavored, and would easily fit inside the mouth. Could a kid ask for anything else? These were also used as a means of settlement if parents couldn’t buy their child something they have been relentlessly demanding. They are still being sold, but are nothing like the ones we relished in our childhood. 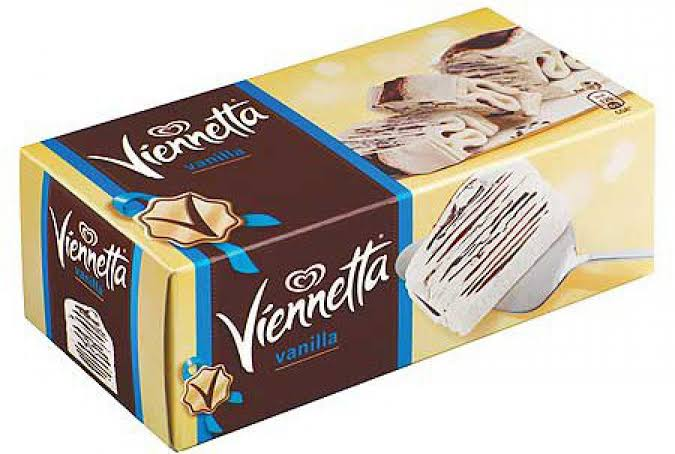 Aren’t you grateful that the company manufacturing this creamy, rich ice cream still does it? Viennetta is one popular dessert which many families have been enjoying for years and it has become a must food item in their refrigerators. It has just the precise amount of sweetness and a scoop of it would be enough to lighten your mood. 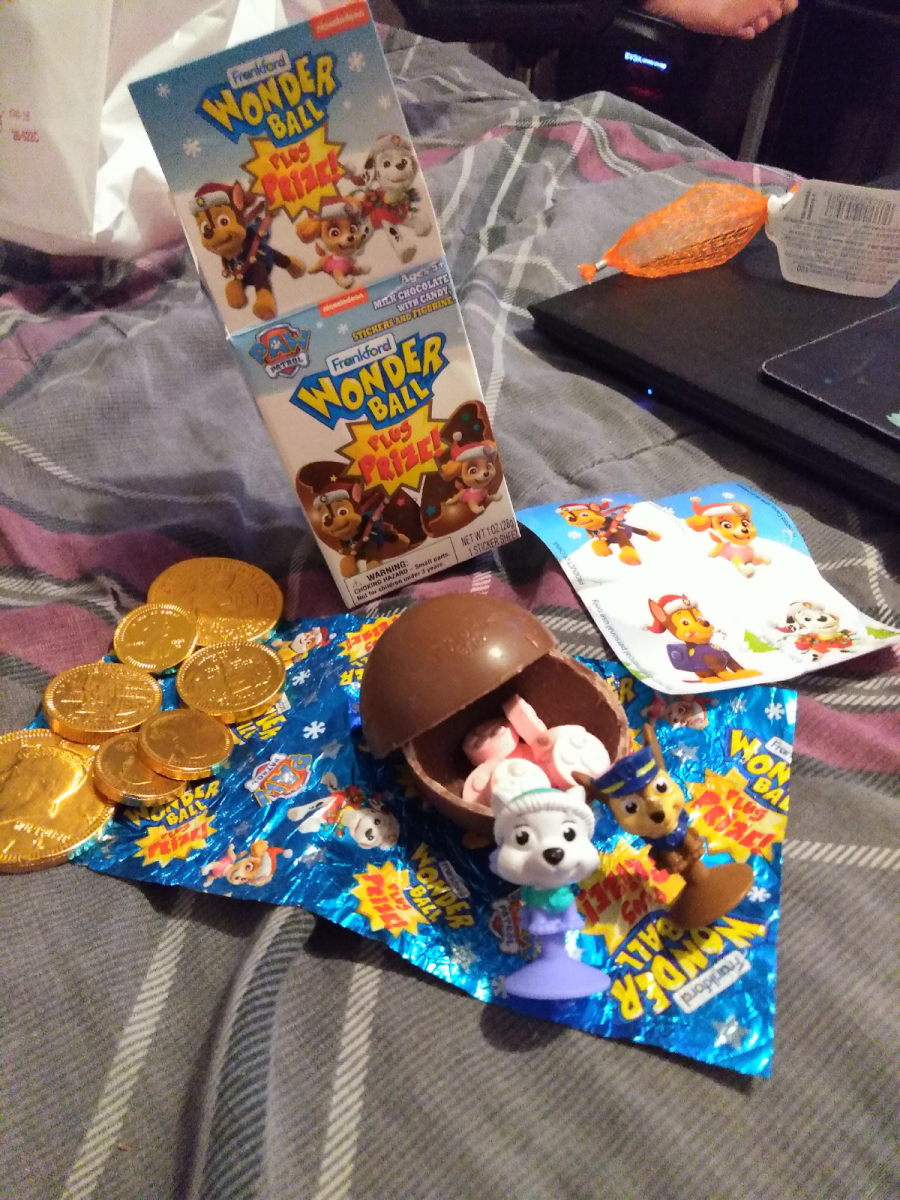 Much like the Kinder Surprise already popular in the European countries, Wonder Ball was launched in the mid-90s. These were hard, sphere-shaped hollow chocolate balls with miniature Disney characters inside them. Due to the risk of kids swallowing and choking on the toys, Wonder Ball was withdrawn from the markets in 1997. Thankfully, they made a comeback in 2000 and this time they had candies instead of inedible toys. 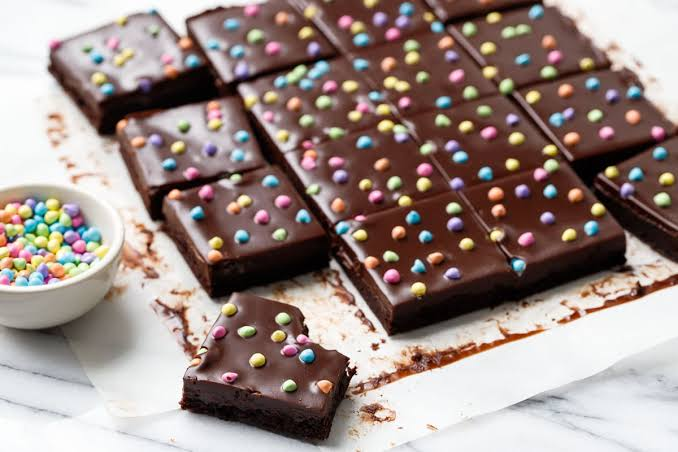 When it comes to baking, Little Debbie is the best in the business. Their Cosmic Brownies are as much loved by today’s kids as they were by the kids in the ’90s. These are brownies cut into small squares and have a thick coating of melted chocolate and are then topped with teeny rainbow candies. These taste as divine as they look. 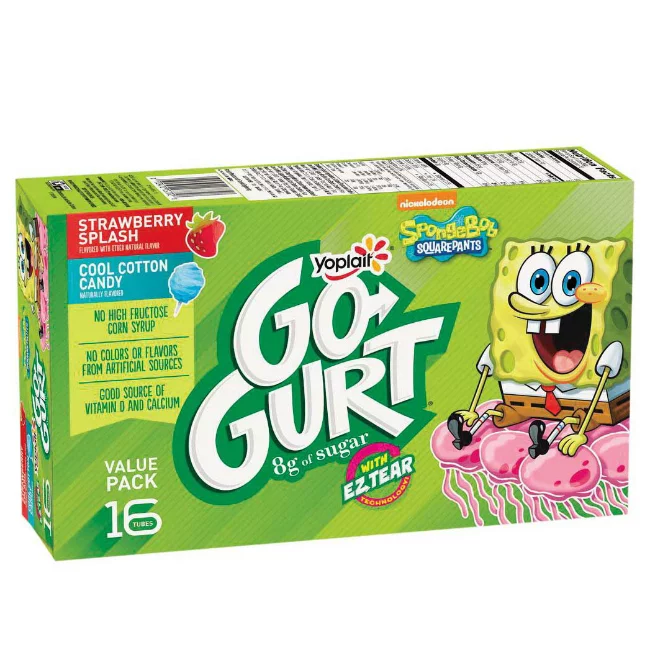 Go-Gurt was the first one of its kind snacks and won people’s hearts in no time. There were two different flavors of it – strawberry splash, and cool cotton candy. Both of them were so good that it used to be a tough call to pick one and leave out the other. You didn’t even need a spoon to have this yummy yogurt. It could directly be slurped from the package. 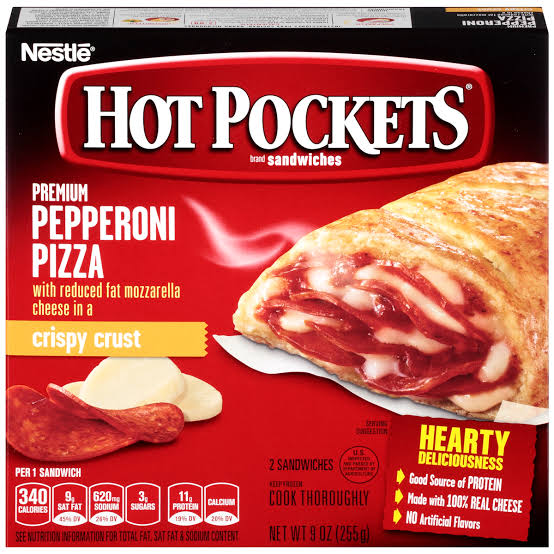 Pizzas (we know your mouth is already watering) are hands down the most loved food ever invented. They are soft, cheesy, flavorful, and everything one expects and desires in a dish. Sadly, our parents wouldn’t allow us to have them every day and it was for such times that Hot Pockets were introduced. They were an ideal substitute for a pizza. Though available with different fillings, the pepperoni one was the bestseller. 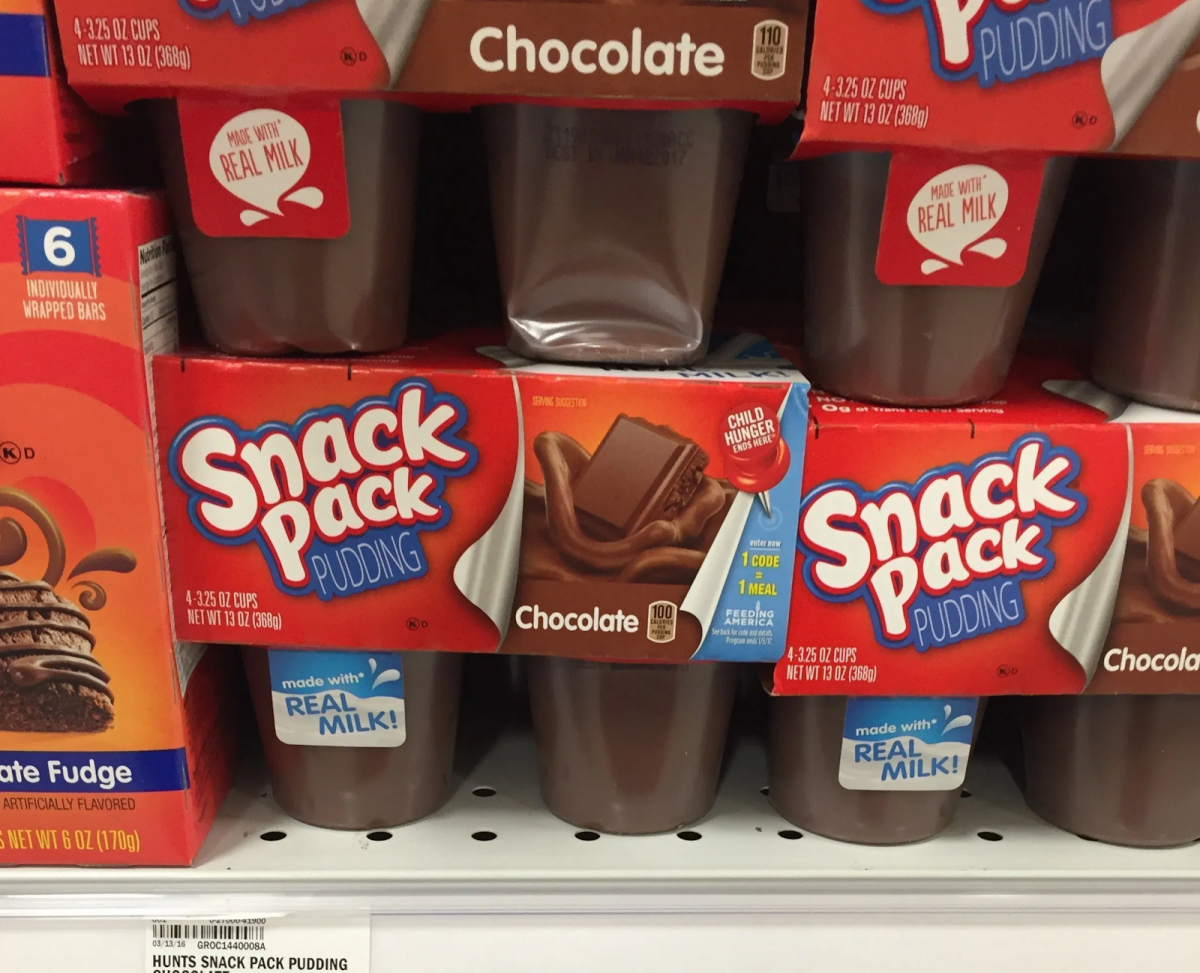 Whether your craving was for chocolate or butterscotch or some other flavor, you knew that Hunt’s Snack Pack was at your rescue just some strides away on the top shelf of the kitchen and that, just a minute of pleading with your mom would get you 5 yummy minutes of happiness. The primary ingredient in these was skimmed milk and there was the absence of any preservatives. They were thus, a nutritious option when compared to other such flavored snacks. 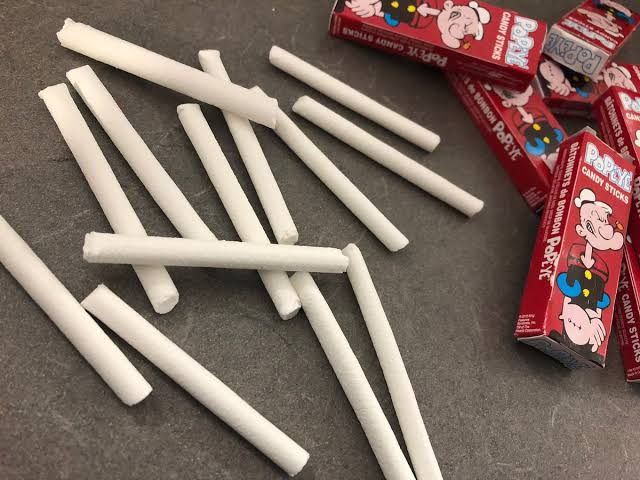 If you are a chain-smoker and wish to quit smoking, then Popeye Candy Sticks might come in handy. These sticks are filled with sugar and chocolate and wrapped in a way that resembles a real cigarette. This may sound crazy but they also make smoke on puffing. Thus, they give you the feel of a cigarette without causing any harm to your lungs! 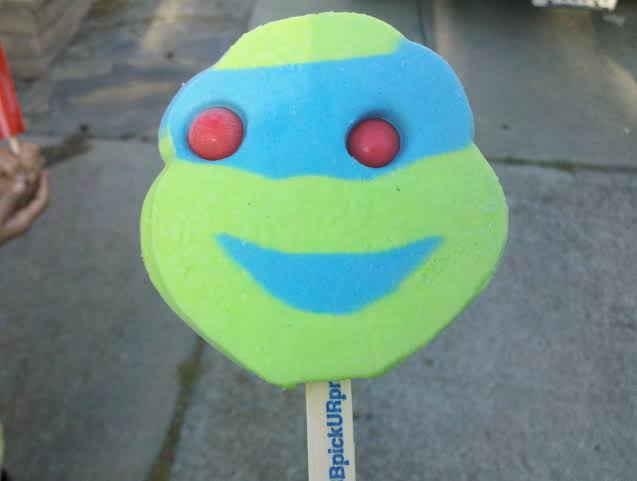 From helping us make up with estranged friends to being a delight on a bright sunny day, Ninja Turtles ice cream has served many purposes. These flat green-blue colored, turtle faced popsicles were one of those things that no one could say no to. Suck them or have them in bites, they tasted heavenly and unmatchable no matter how you ate them. 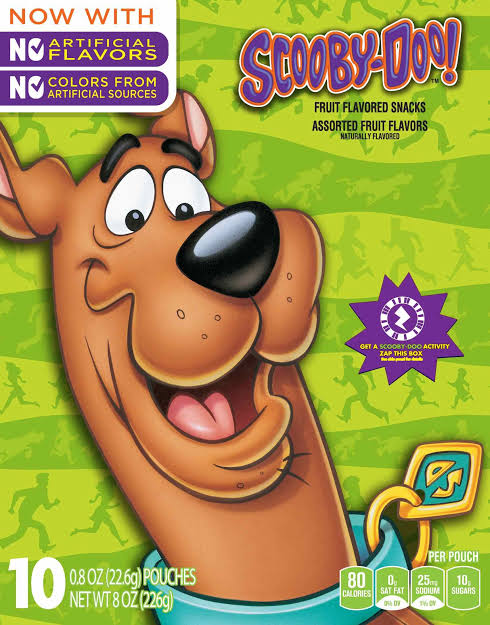 There was a time when no birthday or Halloween was complete without Scooby Doo Fruit Snacks. These ticked all the boxes of what kids below the age of five like. They were sweet, came in different fruit flavors, the shapes were inspired by their favorite cartoon show, and even the wrapping was kind of cool. 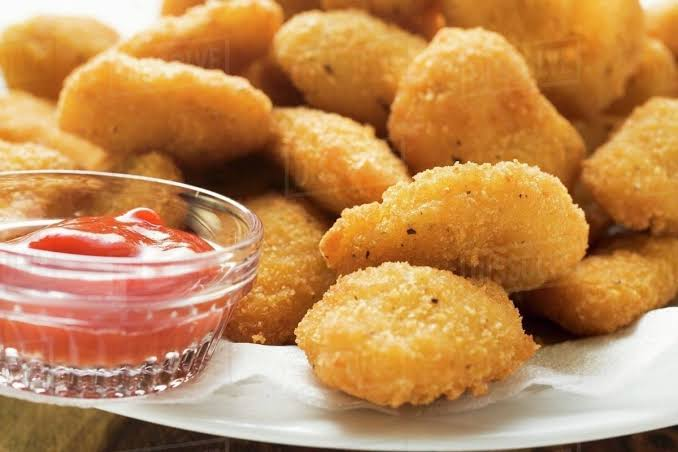 No matter how much our parents tried to dissuade us from ordering chicken nuggets and opt for something healthier, we would have them every time we were taken to a restaurant. A plate full of crispy chicken nuggets with some ketchup on the side seemed like the best food on the planet. Do you still love munching on them? Or are you now on the other side of the fence and encourage your child to have something else for a change?