Hilarious Beach Snaps That Will Put A Smile On Your Face

Everyone deserves a vacation, especially after the crazy pandemic that we have all gone through. You could settle with going to another country or to a different town, but an ideal spot for many people is to wait until summer rolls around and spend it on the beach.

We say this is the ideal location because around beach season, social media feeds tend to be full of these things. Some of them are all in good fun with smiling faces and beautiful views. These pictures are typically meant for family, friends, and some followers.

However, some of the pictures people take manage to go viral and spread across the internet with millions of people who see it. Oftentimes these are the hilarious or even shocking pictures that garner this attention.

And below are precisely some of those pictures. If you’re looking to get a chuckle, check out these pictures.

Sitting In The Wrong Chair 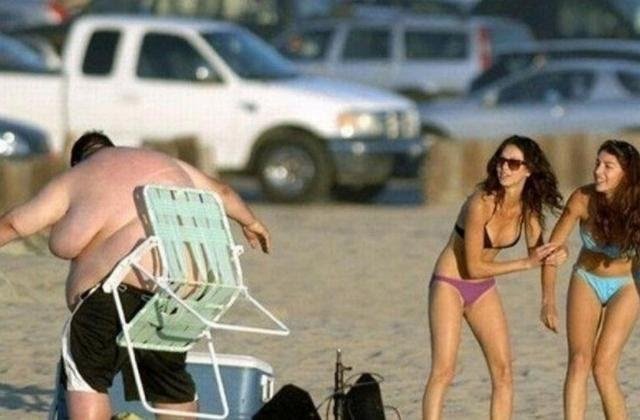 As a general rule, an incident involving a chair is always going to end up with an embarrassing experience. In this case though, our initial thought was how did this man think it was possible to get into the chair from the very start. The only thing that makes sense to me is that after a long swim, he wasn’t thinking and decided to sit in a chair and take that risk.

Regardless of his thought process, his decision was costly as several onlookers spotted this and now it’s on the internet. Two of the onlookers were even captured in the picture itself.

When Things Get Tough 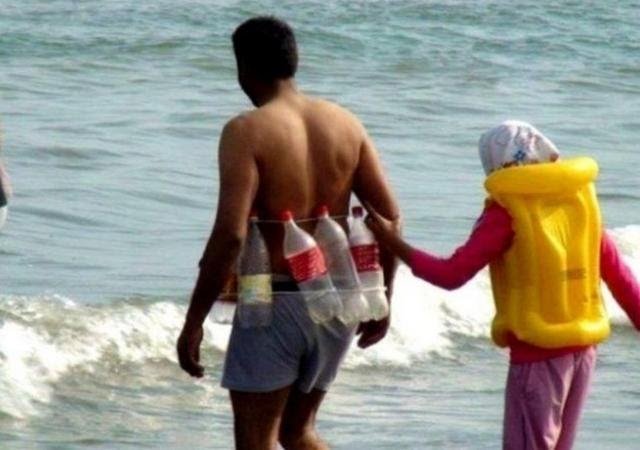 For people to look for budget options, we gotta give mad props to this guy for being creative. It’s understandable to be in this kind of situation. You have a small budget to work with, so you’ve spent the extra cash on your children for the month.

What this dad has done is find an affordable way to enjoy the pleasures of swimming in the sea with his kids and he’s not letting his inability to swim get in the way.

If you like so many other people in the world who can’t swim, this man has created a neat DIY option for people just like him. 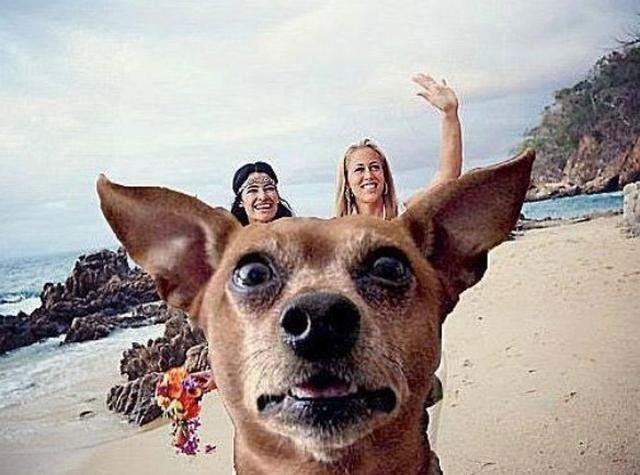 Photobombs can be pretty annoying at times. You’re trying to capture a sentimental moment or a beautiful view and suddenly, BAM! Someone appears in the shot and ruins everything. Clearly in this picture, the girls wanted a memory for their social media feeds.

But the end result was this. The memory was dashed when one of the dogs strolling on the beach wanted to be part of the memory. Though this story doesn’t have a sad ending. When the pair shared this on social media, the adorable picture spread far and wide, creating a memory for more memorable moments in the process.

Halfway There My Guy 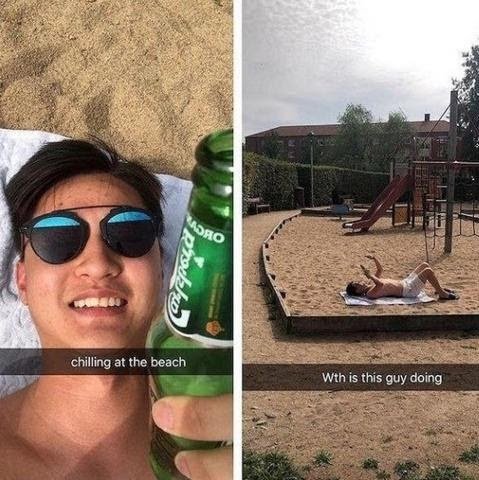 The beach is such an enviable place sometimes that people would do anything to be there over the summer. Some people will just bide their time while others do things like this. Clearly the guy was fishing for engagement on his Instagram account and makes it clear that he’d go to great lengths to create this illusion of being on the beach during summer vacation.

The reality is the guy was caught by someone else who snapped a pic of the moment of him being on the playground not far from his home. Is it sneaky, or was the man a genius? You decide.

The Return Of The Seagull 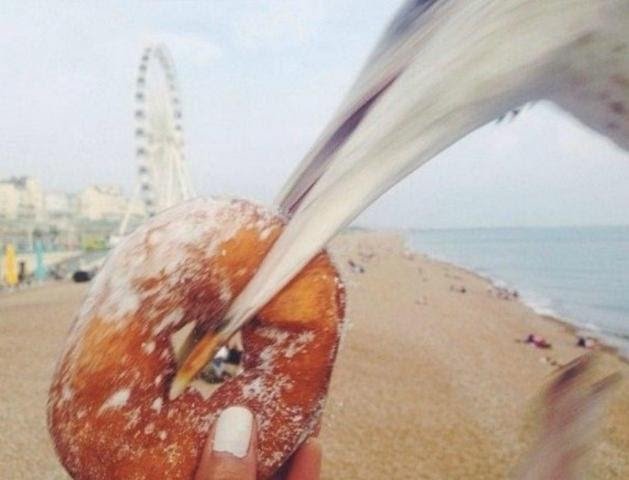 What was meant to be a very cute picture for social media of a lady holding a delicious donut turned out to be something entirely different in the span of a few seconds. Unlike a few other birds, seagulls aren’t scared of human beings. This leads them to being bolder than other birds.

This especially becomes the case when they see an opening to snatch food.

Bombing this photo and creating a rare up close shot of a seagull, my only hope is that the woman had eaten her replacement doughnut faster than she did this one.

Revenge Of The Seagulls 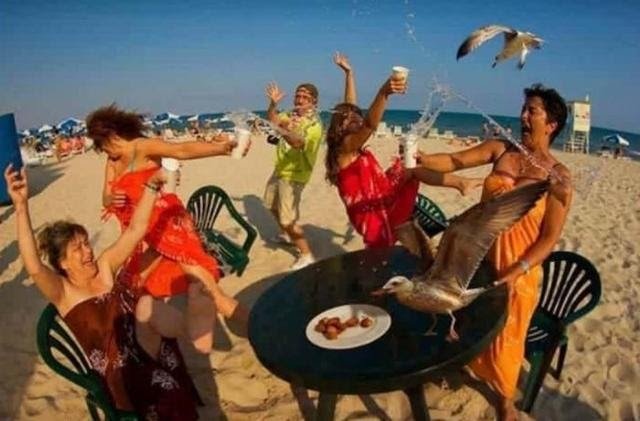 In case the first shot wasn’t enough for you, here is another one that makes you consider how you handle food on the beach. For the family pictured here, a relaxing afternoon turned out to be more frightening as a group of seagulls decided to jump in.

For the people involved, we can only imagine the whole experience was traumatic and made them rethink bringing food to the beach from that day onward. For others though, it’s a laugh and a reminder for us to be smart about food on the beach. 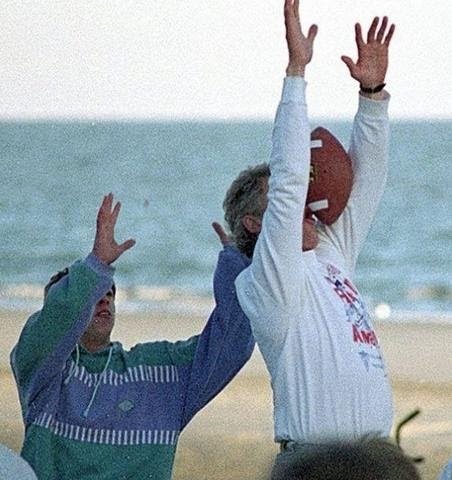 Bill Clinton was not only the president for a time, we’d go as far as to say he is the president of compromising positions. There are a fair amount of pictures of his blunders that aren’t fully scandalous, but certainly hilarious. This particular picture is a lesser-known one where it’s clear he was better in politics rather than on a sports field.

Whoever managed to get this picture deserves a lot of credit for the timing. After all, this picture turned into a meme that has been shared millions of times across the world. 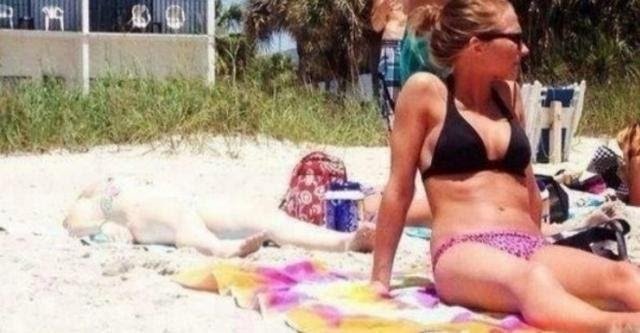 When going to the beach, you want to make sure you are taking extra precautions when it comes to sun exposure. Some people, particularly those with a fair complexion, have to be even more careful of this damage.

The woman in the shot is so close to simply blend into the sand itself. My hope is that she’s spent a few minutes there or else she is bound to be running for the aftersun later in the evening. Be sure to stay safe and drink plenty of water. 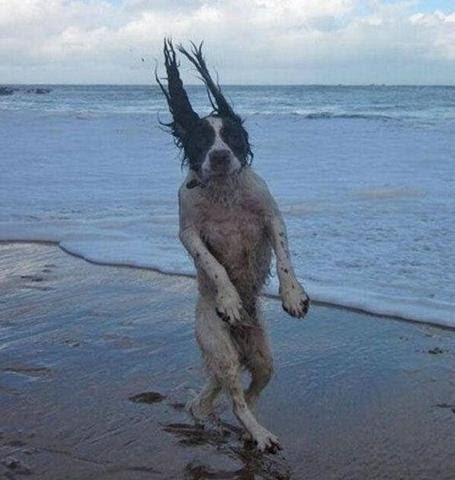 There are plenty of accounts devoted to dogs these days so it can be hard to follow all of them.

A lot of the time though those posts are devoted to owners sharing futile moments of being a pet owner or showing some cute pictures. This owner however had an entirely different idea for this picture.

The dog is in such a position that it almost looks like he’d be able to walk on the catwalk at a modelling or fashion show. 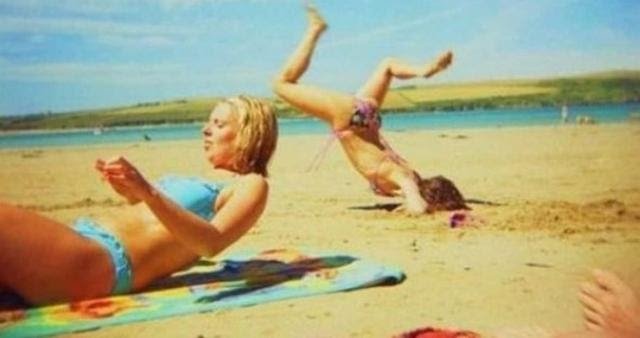 We’re not professional judges for a gymnastics competition, but we do know enough about handstands to tell which ones are good and which ones are failures. This one is definitely a failure.

To her credit, it can be a lot of fun to try this out on the beach. The sand is soft and your only risk is getting some sand in your mouth. However there is still that bit of risk like the fate of this poor woman. Our only hope is that the woman didn’t break any bones.