This Is How You Travel 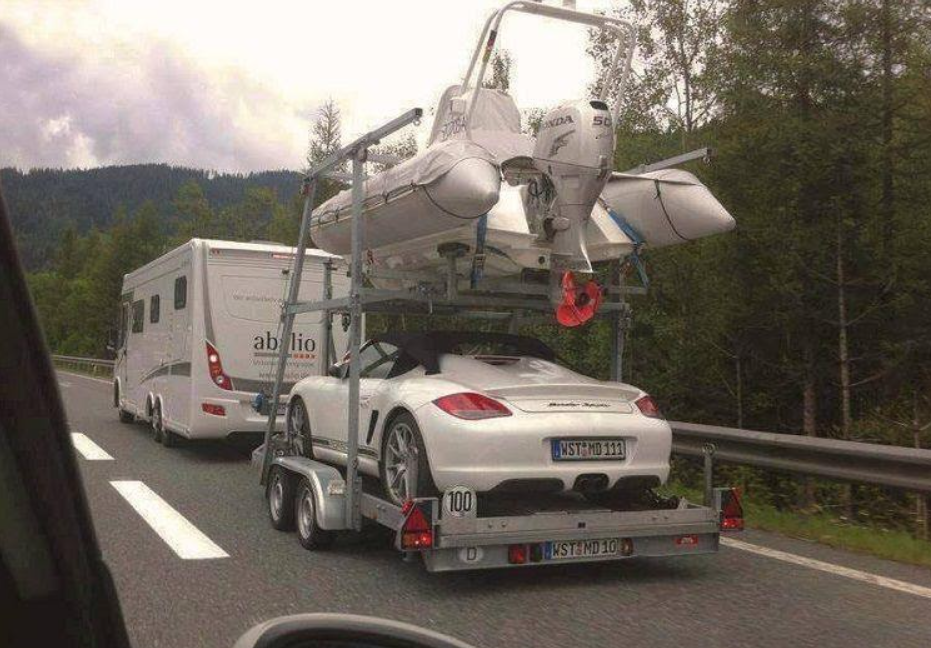 Continuing with the idea of wanting modern luxuries while camping, this dude took it to whole another level. Well, you cannot honestly expect rich people to stop being rich when they go out to camp, can you? While all this seems a tad too much for the wilderness, it still is their choice.

This dude got a trailer, a luxury car, and a boat for traveling and having fun in the wilderness.

Well, we cannot figure out how that car might be useful for camping, but that boat will definitely make his camping experience amazing.

If you look at this setup, it is impressive to be fair. And it definitely makes you curious to know more about folks who do this, or the destinations they’re headed to where they’ll be needing their luxury car and a boat. 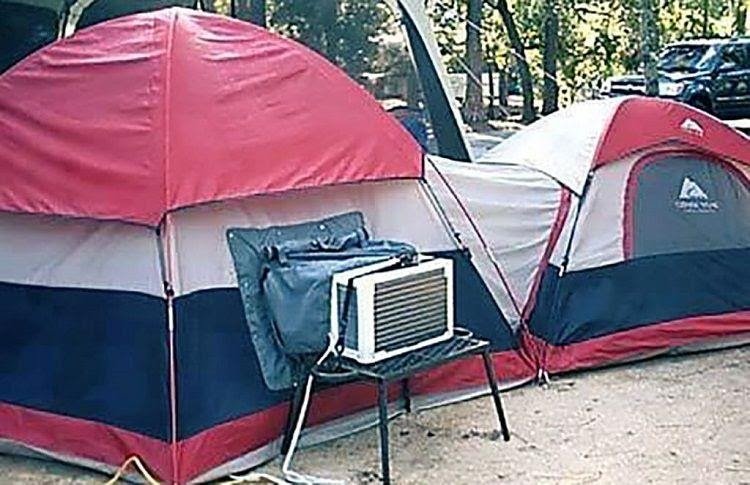 Talking of rich people camping setups, this is another one of the things a lot of rich folks do when they head out for camping.

We get it – it is a nightmare for rich folk to leave the comforts of modern luxury and head out in the wild. But, well, that’s the whole point of camping – to leave the modern comforts behind and enjoy some quality time in nature.

If you are one of those people who wish to take an air conditioned tent during camping, you aren’t really ready for living in the wild. Or, you can just pick a different season to go out camping, when the weather is not so taxing. 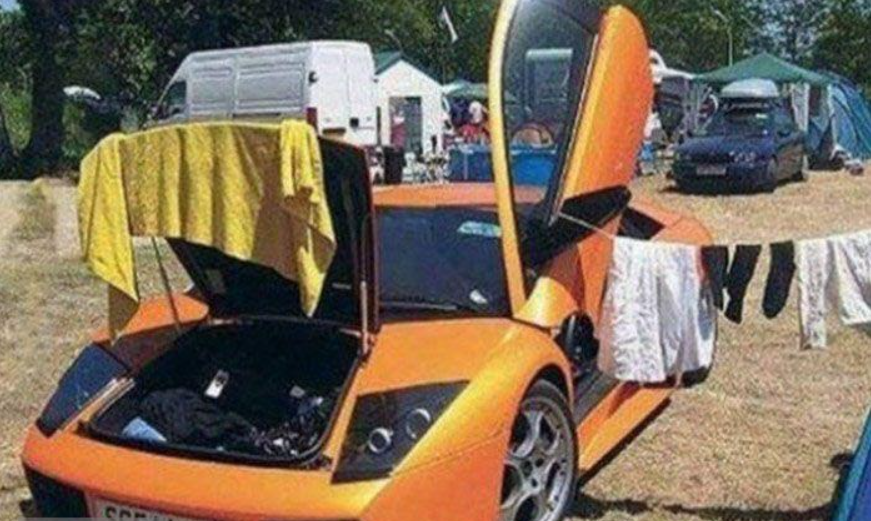 There are people who get a kick out of taking their posh cars out in the wild. Seriously, why would anyone take such expensive cars where you can find muddy rainy roads and find your car stuck there. In fact, there’s more chance of your car being stuck in the mud than making it back from the trip without being stuck!

Regardless of whether you take your luxury car on a camping trip or not, this is the weirdest use of a posh car we’ve ever seen. Did the owner just randomly go on a trip, so he couldn’t take a different car?

Or, maybe he doesn’t really care too much about his car. It is a Lamborghini, so what? We do have to admit, though that surely is a perfect dryer! 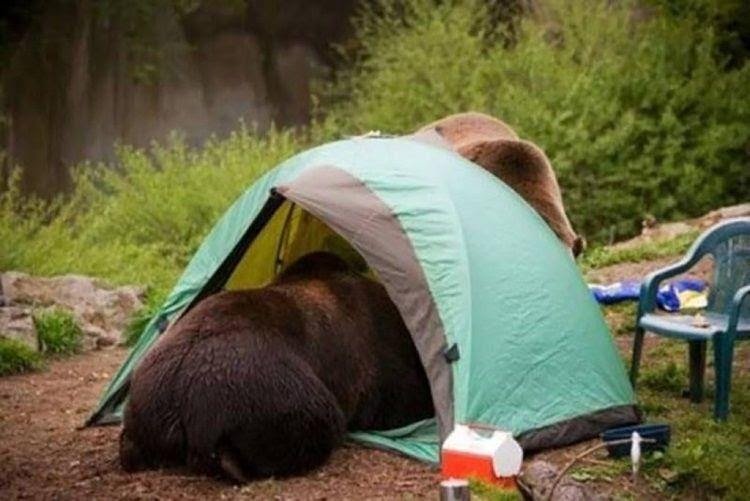 Going out in the wild is amazing and fun until these furry friends decide to show up at the site.

Looking at these adorable creatures, they don’t seem to be happy that no one invited them to this nice little camping party. That wasn’t an issue, though, as they invited themselves and decided to have a good time.

They are trying to fit in this tent, which is funnily small for them. What would you have done if you were in this situation?

Well, you can definitely bring a larger tent next time around so that these furry guests can easily fit it. Or, one can also camp where there are less likely chances of a bear showing up and crashing your party. But where’s the fun in that?

Not So Nice Cup Of Tea 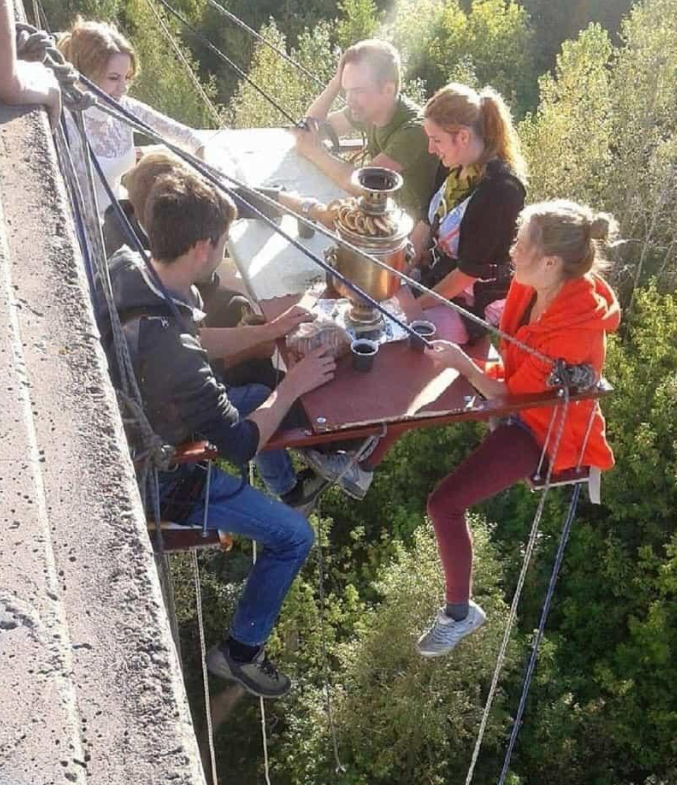 If sleeping on a bed hanging off a cliff wasn’t fun for people, they are now having tea on it and apparently enjoying it too! Well, this is certainly new.

It isn’t clear if there is a camping location where you can pay and enjoy the view or they set it up themselves, but we can definitely agree with the fact that this family is brave to have tea and chat while their feet dangle in the air.

This isn’t our ‘cup of tea’ for sure, literally. Despite the dangerous situation they’re in, they seem to be happy to ‘hang out’ and have fun together. 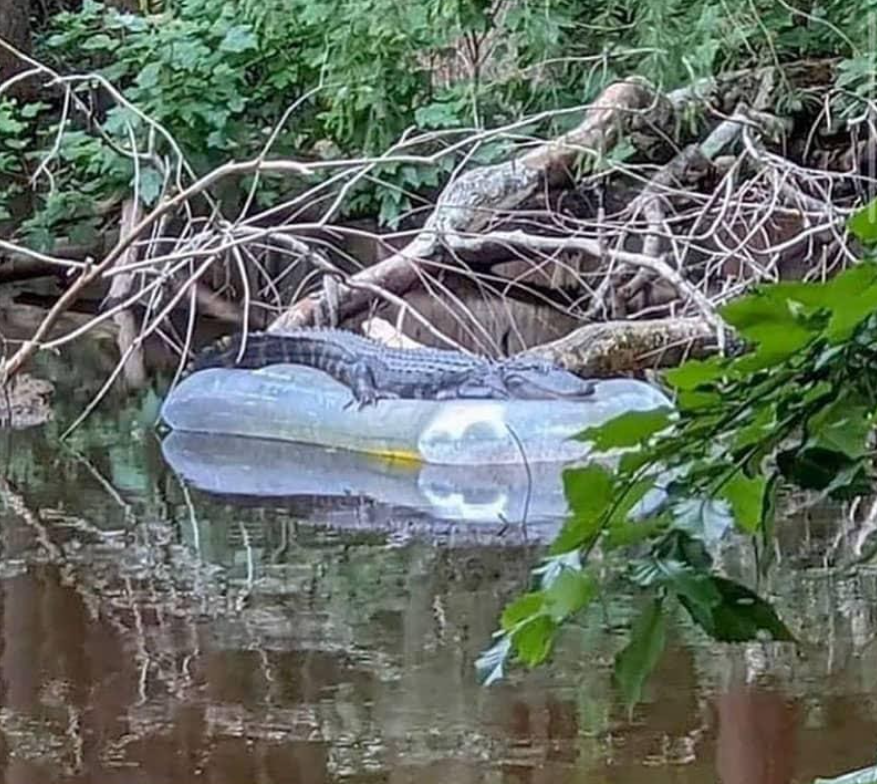 There are people who associate a lack of intelligence with animals, which cannot be further from the truth. They probably haven’t seen an alligator chilling out on a water mattress, having the time of his life! The person who took this picture must have received the surprise of his life when he noticed this alligator lying on top of a water mattress.

We would’ve been surprised to see that as well. This picture also raises the question as to how it got the water mattress in the first place. Did the gator just find it and thought about using it?

Or, it was being used by campers before the gator decided to join in and scare away the campers? We will never know. 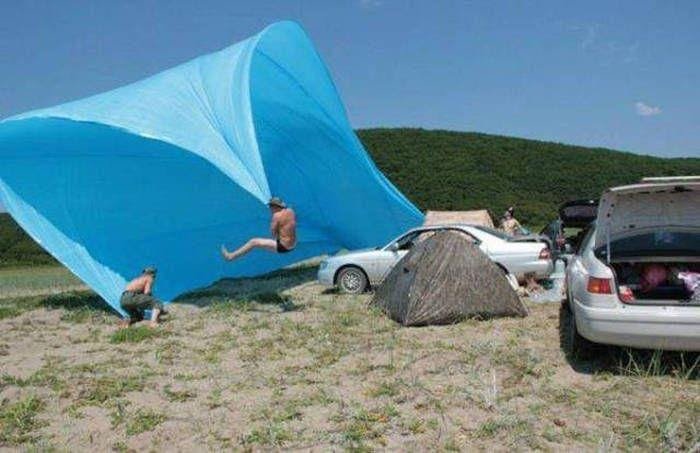 We are not sure if this was just a harmless prank or they really took this tent made out of thin material, but this is camping 101. You never take a camping tent that’s so light even a gentle breeze could blow it away, as happened in this case.

Look at these amusing campers who are trying hard to prevent their tent from blowing away while the wind lifts one of these campers up. Unfortunately for them, it looks like the exercise ended in failure. If you were in this situation, what would you have done? Well, most sane people wouldn’t take such a tent in the first place.

Else, they are just waiting for disaster to happen. They may sleep in a nice tent but wake up only to find out there’s no tent!

Grill Made Out Of Grocery Cart 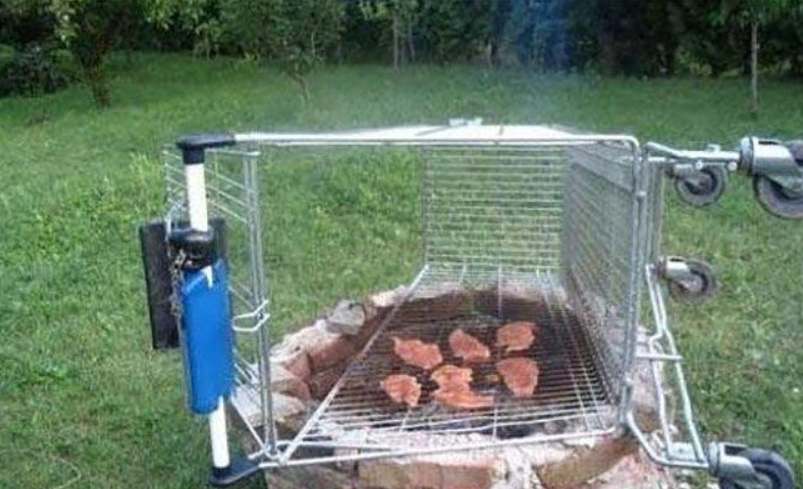 Die hard campers always love to grill some meat, don’t they? However, these geniuses decided to use a crazy setup to grill, instead of just using a regular grill. Honestly, we’ve never seen a grill like that ever.

Shopping carts can be fun for sure, but there’s no way we would have ever thought of using a shopping cart as a grill! For starters, we aren’t even sure if that metal is safe enough to grill meat on! It isn’t supposed to be put at such a high temperature.

Going just by the looks of it, it sure seems like a nice way of grilling stuff in the open, but we wouldn’t encourage you to try this. Even if there’s a shopping cart in your backyard. 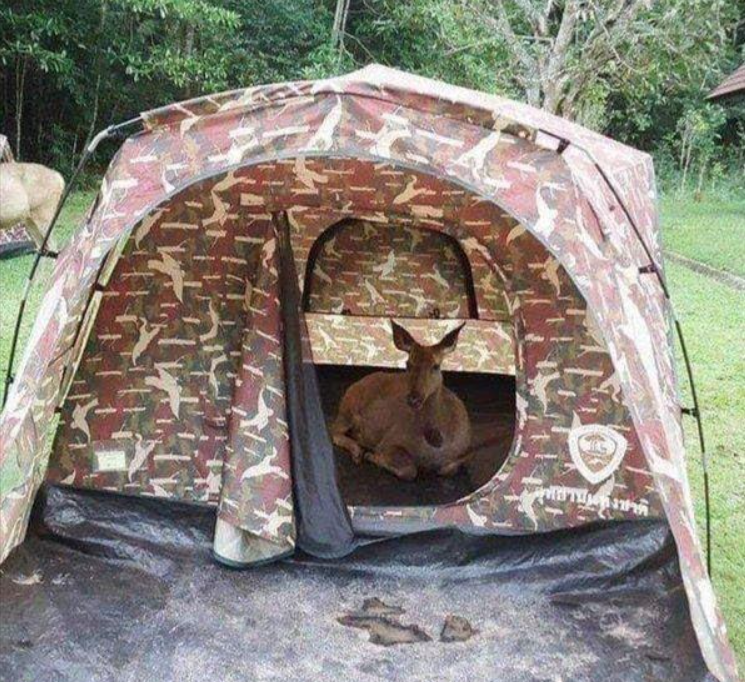 Deer are rare to spot, especially when you are out in the wild, camping. These poor creatures are always scared and run like anything when they spot even the remotest of sounds. But this one definitely seems brave!

This beautiful animal thought it was definitely a nice idea to enjoy the comfort of a tent, and also protect itself from predators. Look at this deer – it looks as if it owns this tent!

But the question arises, how do you make it get out of there? And would anyone want to scare away this beautiful creature, anyway? It is a once in a lifetime opportunity to try and befriend this beautiful wild friend. 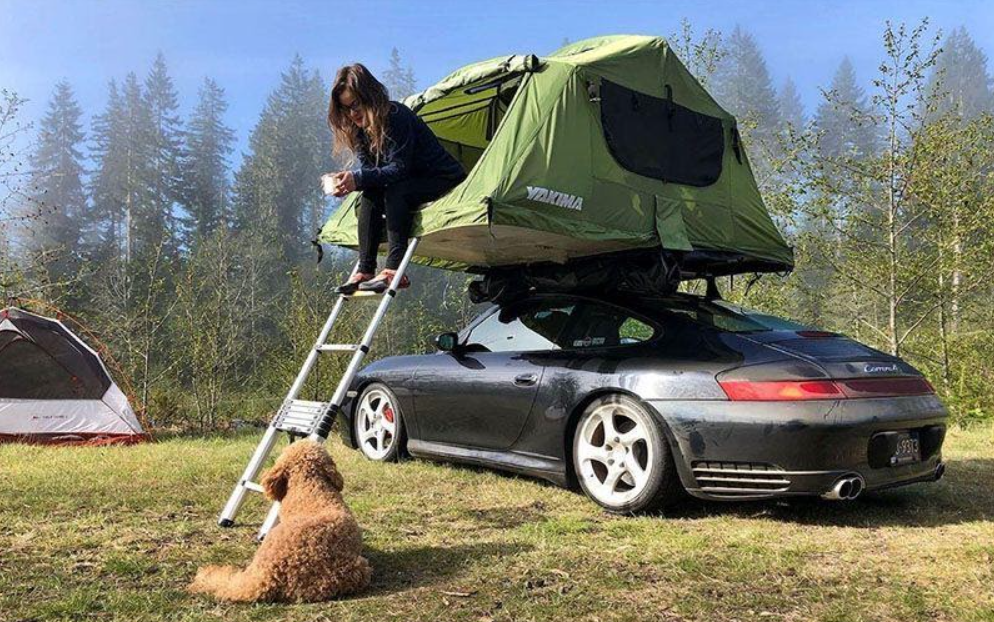 We aren’t really sure what they are trying to do at this camp site, but seeing the use of a car in this way is definitely new for us.

Seriously, can you even believe these guys? Instead of having a normal tent on the land, they decided to place it on their car top!

Well, the only reason one could do this is to avoid the cold, damp ground. Also, wild animals might possibly stay out of reach, but it honestly isn’t worth all this effort! It certainly isn’t comfortable and we aren’t sure if the car will be fine after the end of this camping trip.