Life is full of twists and turns. Be those good or bad, they do give our souls a jolt and make us realize that we aren’t as much in control of our lives’ events as we think. Albeit the joy or sorrow they bring; it is these happenings that make our lives worthwhile.

Such take place all the time. However, not everyone is lucky (or unlucky) enough to witness such instances. The following pictures are true examples of best-timed photos. Those behind them deserve to be lauded for their agility in capturing these moments. Keep scrolling to check them out. 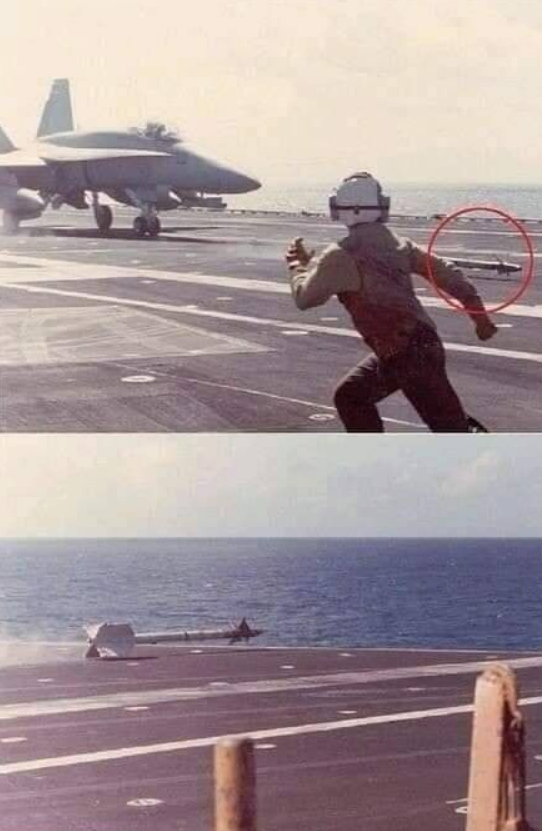 This has to be the funniest, yet scariest of all the best-timed pictures. We cannot even imagine the fear the man running from the torpedo would have felt. Those who go to the military undergo months of training and the likelihood of them making such a horrendous mistake is negligible. But that doesn’t mean anomalies can’t and will never happen.

The plane was about to take off and just at that moment, a torpedo came out of it, scaring the man there for life. We don’t know whether this incident cost the pilot his job or not, but it definitely should have.

Is it Even Possible? 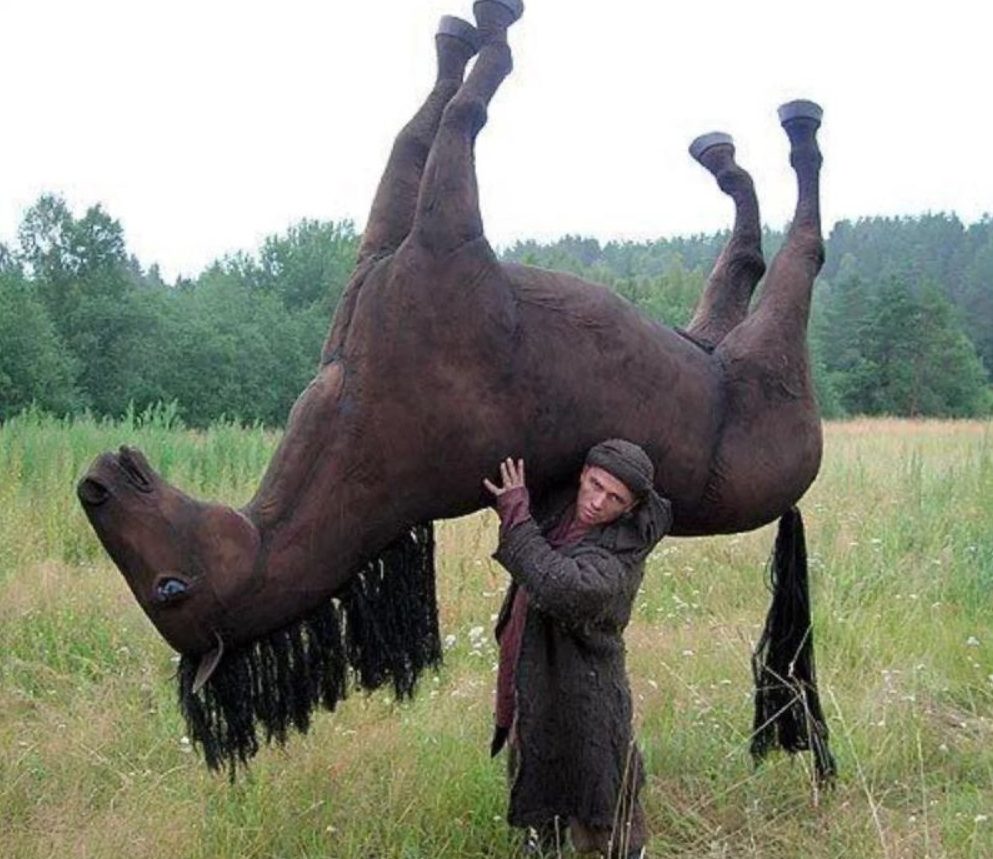 Most of us have heard that we can only lift a maximum of a few kilograms more than our body weight. But, this picture is a stark contrast to that. A fully grown horse can be anywhere from 900 to 1500 kilograms (which is equivalent to over 2000 lbs).

Guessing by the picture, we may assume it is from some village in Russia and weird things are quite a norm there, but this is too much to be believable. Even if that ain’t a real horse, but an effigy the man is carrying, it’s still going to weigh a lot. And, if that’s a real horse, we have to admit he is the luckiest one. For, no owner can be empathetic (and strong) enough to carry their horse when their pet feels tired. 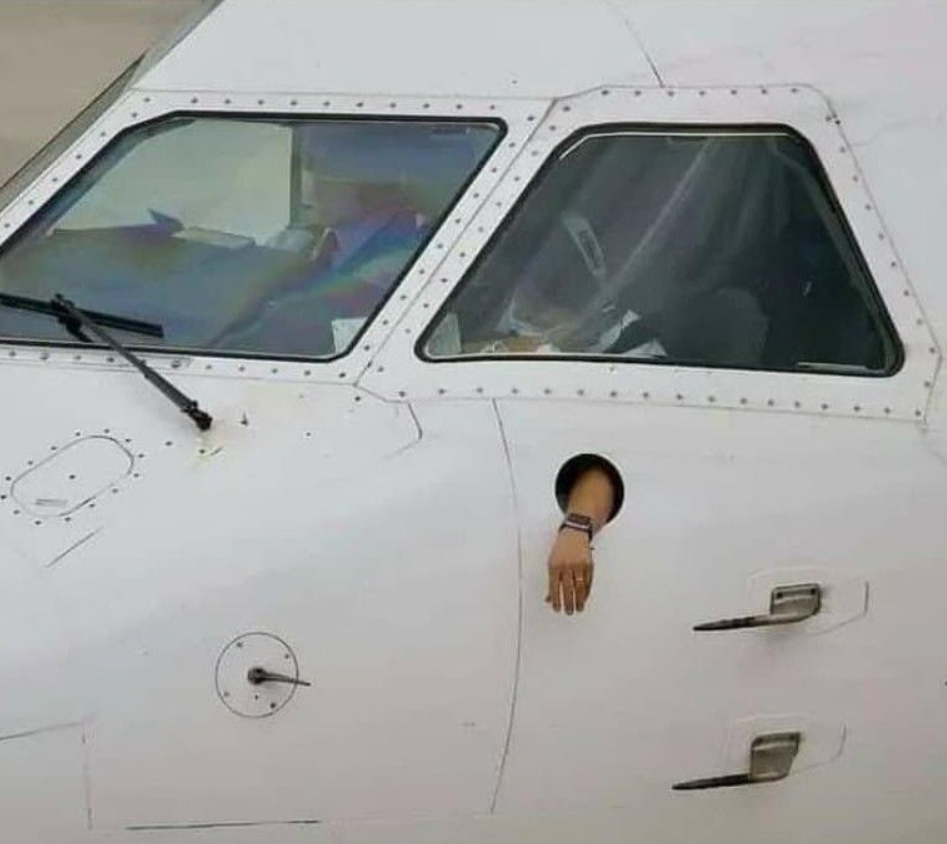 Firstly, the hole to stick the hand out is hilarious and has us questioning its purpose. Secondly, the pilot actually using it has us ROFL. Aren’t aircrafts supposed to have an opening like that?

We highly doubt it.

If you have been to any country in Asia, you’d have noticed the cab riders or even the general public with a car signaling where they are intending to turn using their hand during daylight. Is that what the man in the cockpit here is trying to do? In case he is, is there a need for that? This picture does indicate that this man has spent more years driving a taxi than flying an airplane. 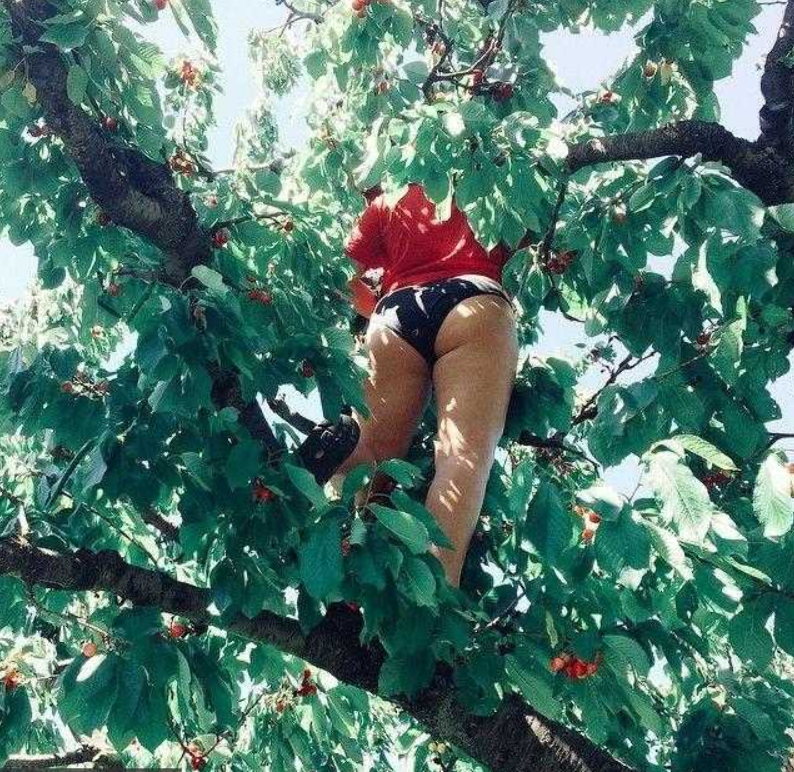 With the advent of social media sites and precisely Instagram, stories of people doing weird and scary things to get that perfect shot have become a common thing. What’s the most absurd thing you’ve done that made you Insta Queen or King?

Let’s appreciate this picture a bit. Be it the lighting, the effect of leaves and branches, the girl’s costume, or her figure, it all came together to make this photo a dream.

We do not know if the girl purposely climbed that tree to get clicked or it was just a candid shot by the photographer but he sure must’ve had a lot of fun.

Omg! What Did They Do to You? 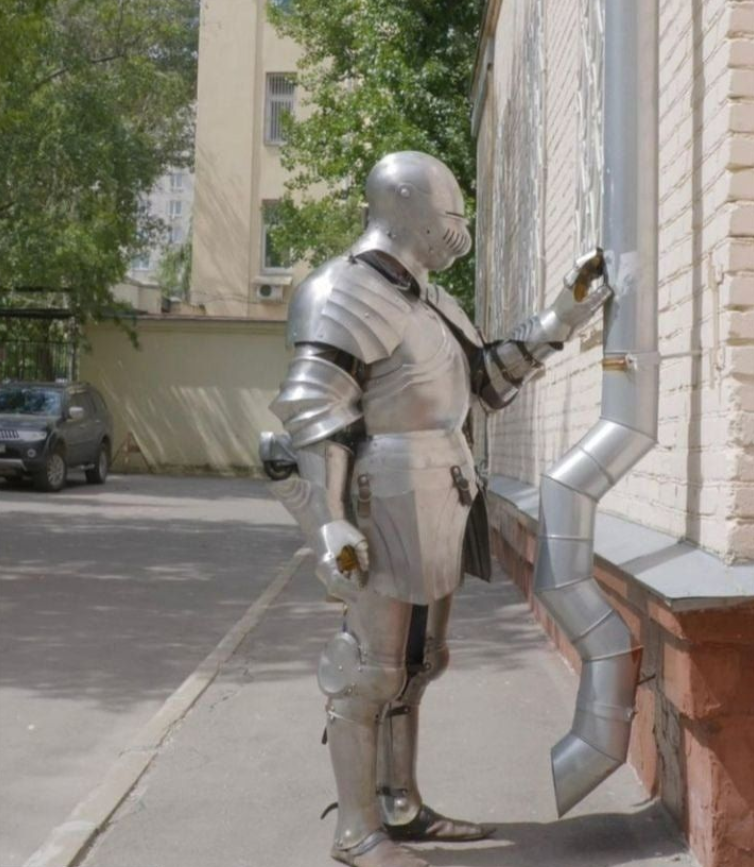 Both the robot and the pipe are made of the same material but they are starkly different. One is capable of walking around while the other is fixed. From the picture, it appears as if the robot is trying to talk to the drain pipe and maybe understand its plight.

We are glad someone decided to capture this shot and share it with the rest of the world. Isn’t it funny how similar yet different they both are at the same time?

Do Cheetahs Need An Accessory to Look Better? 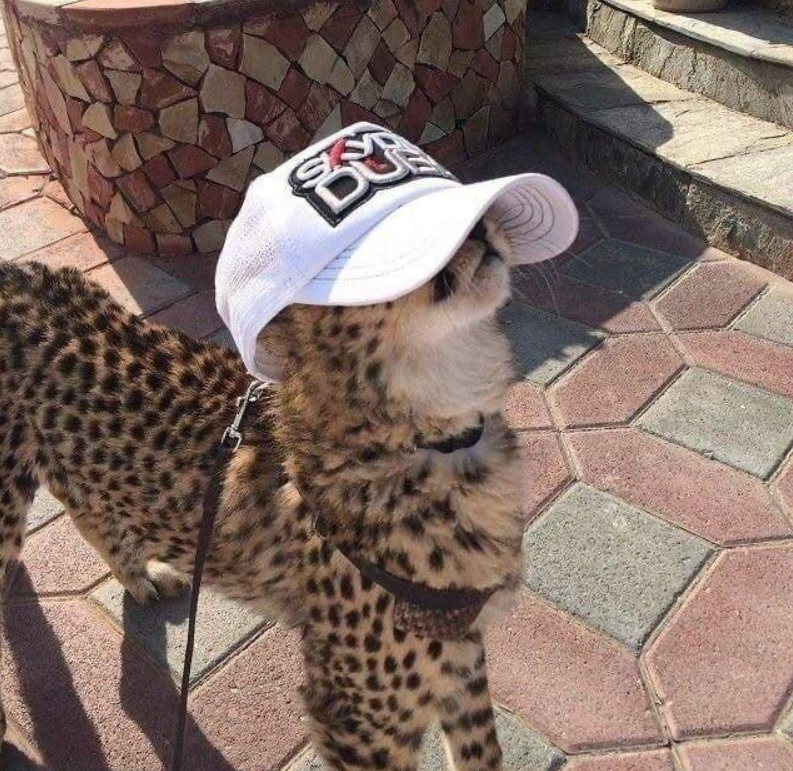 Cats have to be one of the prettiest creatures of all. Their beautiful eyes are hard to look away from. Besides, no matter how scary the other members of the cat family look, they are adorable without a doubt.

Judging by this picture, this cheetah must be owned by somebody in Arab because those are the only few countries that allow people to have them as pets. Kudos to the courage of the Arab people. Many of us would shudder at the sight of a cheetah far away and the thought of them sleeping in the next room would leave us sleepless all night.

Put everything aside, cheetahs are gorgeous by themselves and don’t necessarily need grooming or accessorizing but this dude in the pic does look cool with the cap.

Is That a Girl Backpack? 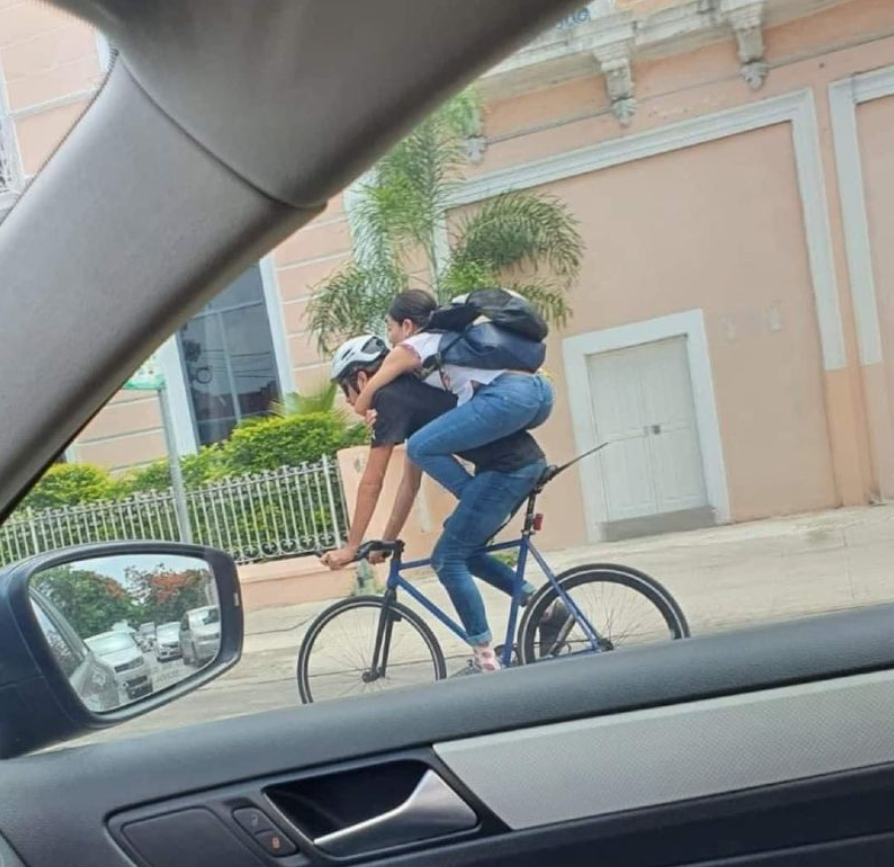 A bike is definitely not the safest vehicle to use and this man has no qualms doubling the risk by carrying his girlfriend as a backpack. He sure does deserve a bravery award. But, why would the girl even be interested in doing such a stunt?

Some people may find this impressive but in our opinion, it’s plainly nonsensical. You risk fracturing a bone or losing a tooth or something more. There are countless ways to express love for your partner and this is not one of them. And, how can we ignore the fact that the lady didn’t even bother to put on a helmet?

Do You Breastfeed? Stay Away From Fake Tan and Here’s Why…… 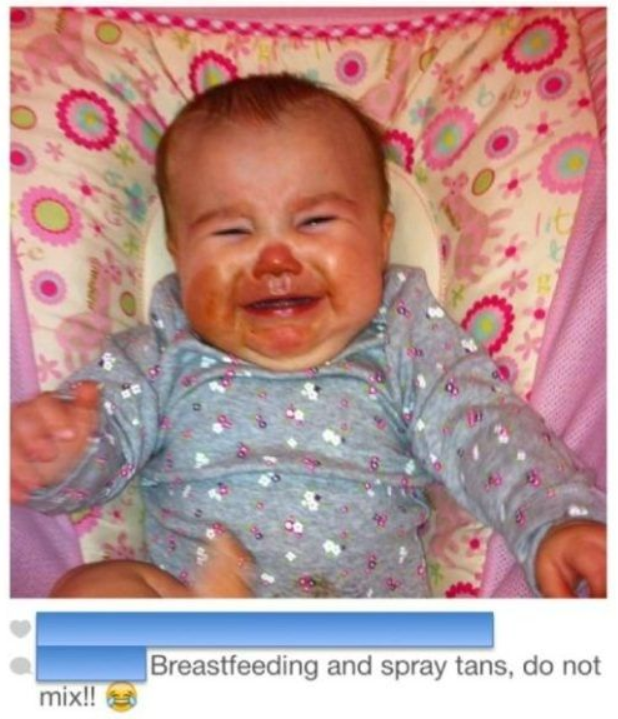 It is indeed hard to stop our laughter after seeing this picture. Besides, the baby’s crying face makes it all the more hilarious. Jokes apart, this should serve as a warning to all the breastfeeding moms out there against going for a fake tan.

We know how healthy and glowing your skin appears when you get a good tan (even if it’s artificial). But, this is going to be a consequence, would it be worth it? And for the ones who are not very familiar with fake tan, it is not very easy to wash off. Even vigorous scrubbing with soap won’t fix it. Also, the chemical composition of tan sprays may not be the best thing for your infant’s gentle skin. 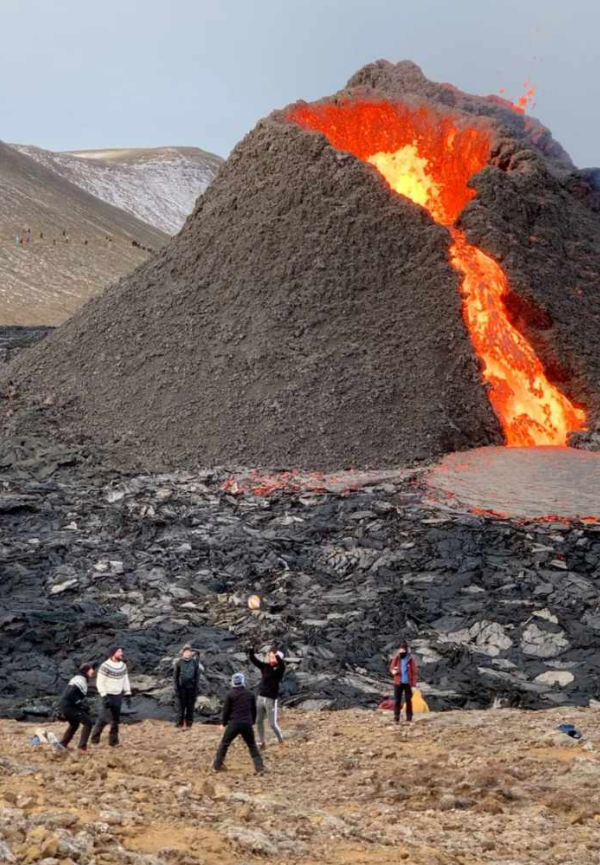 While the thought of being near an erupting volcano can sound daunting to many of us, it’s no big deal for the natives of Iceland. The chilly land of Iceland houses many active volcanoes; therefore, a flowing river of hot lava is just another day for them.

We can tell by the picture that these people are actually having the time of their life. They are playing volleyball in this scenic setting and are totally unbothered by the burning liquid erupting nearby.

Another interesting fact is that these are not random people who are trying to garner fame with this picture. This is Thelma Dogg Gretarsdottir, a popular volleyball player along with his mates and coach. 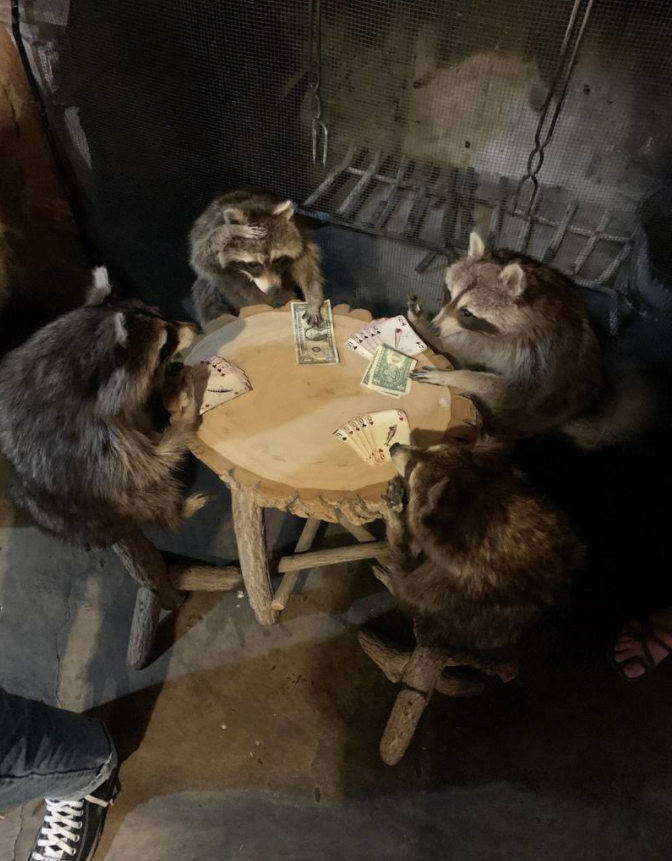 The more we are going through these pics, the more we are getting convinced that animals are way smarter than we think. There are so many questions popping in our heads that are making us doubt the authenticity of this photo.

Firstly, where did the raccoons learn to play poker? How did they get those cards? Most importantly, what are they going to do with the currency notes? Judging by their expressions, it looks like they are pretty serious about the game and don’t want to lose. What would they lose even if they lose?