We all know about karmic laws and most of us have experienced them at some point in our lives. You sow what you reap is how karma works, in simpler terms. At times the results are instant, while at other times the results take time to show up. But if there is one thing that is certain, it is that karma works. Often, it has a knack for striking people in quite a funny way.

We’ve compiled a list of such instances where these people couldn’t even prepare themselves to handle its wrath, as the karma was instant. Without further ado, let’s check out these funny karma moments that prove it is very much real! 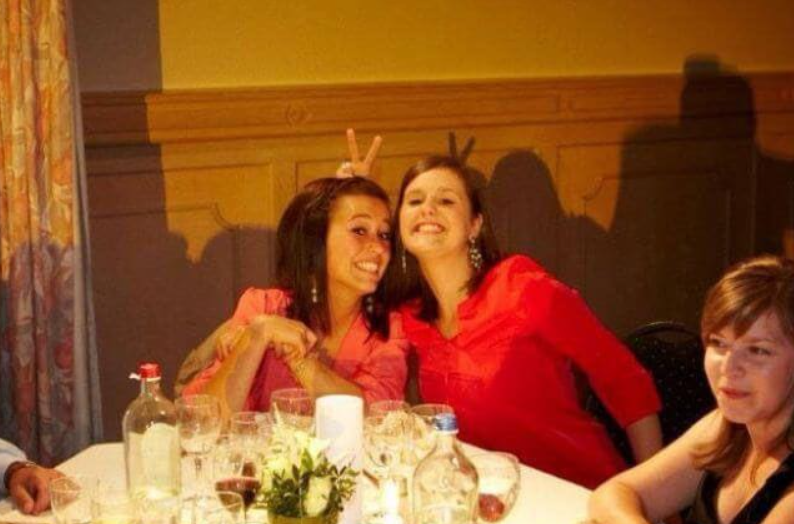 We’ve all had friends in our groups who cannot resist putting up those ‘bunny ears’ whenever you pose for a group photo. It is quite a sweet and cute prank and has been around for a while.

And it totally looks adorable! However, it may end up offending some people so it isn’t completely harmless, either.

In this instance, these two young ladies decided to take a quick snap where one of the girls decided to put up the bunny (or, funny) ears. Well, she got bunny ears as well!

Karma struck instantly in this case and when this lady put up the funny ears on her friend, the shadow from those ears appeared above her head as well. Was it the lightning, or karma?

We thought everyone on the planet has got the memo that harming animals isn’t funny at all, even if you meant it as a joke. Dogs are adorable creatures and deserve all the love and affection from us.

Well, we don’t feel sorry for him at all. He totally deserved that, and karma was instant! 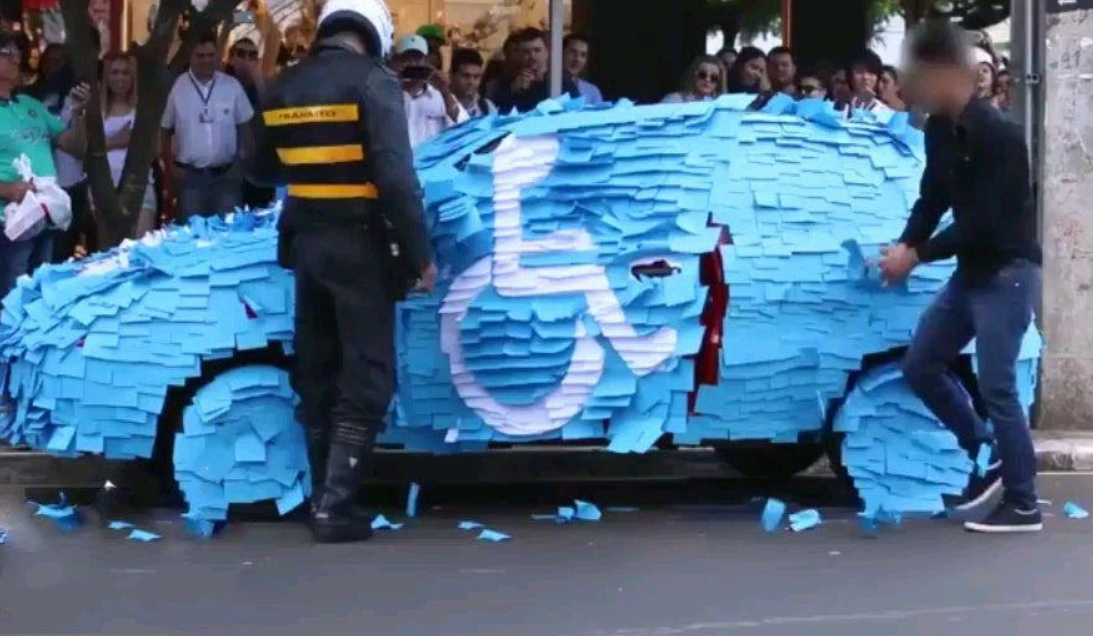 It happens all the time – some random guy driving a luxury car ignores all the road signs and parks anywhere he wishes. Oftentimes he isn’t punished, but there are times when karma intervenes.

One thing is for sure – the driver wouldn’t have expected such an artsy and crazy retribution in his or her wildest dreams for not following the parking laws! Well, someone made sure the driver doesn’t repeat this, by decorating the vehicle in quite a strange manner.

This guy will follow all the traffic rules for sure, and it will also serve as a warning to the rest of the rule-breakers as well.

How Exactly Does Karma Work?

If you haven’t heard of karma, or how it works exactly, this gif sums it up perfectly! You do any act of kindness that benefits someone, and it comes back and later benefits you as well. In this case, it backfires immediately!

Of course, this doesn’t always have to be something bad that people do to others. We can also do the right things for others and hope that karma rewards us for that someday.

Still, this gif is the perfect example that shows how karma works in our day-to-day lives. What you sow is what you reap. If you think of hitting a person with a ball next time, it might bounce back off of them and hit you instead!

You Should Not Play Around With Karma 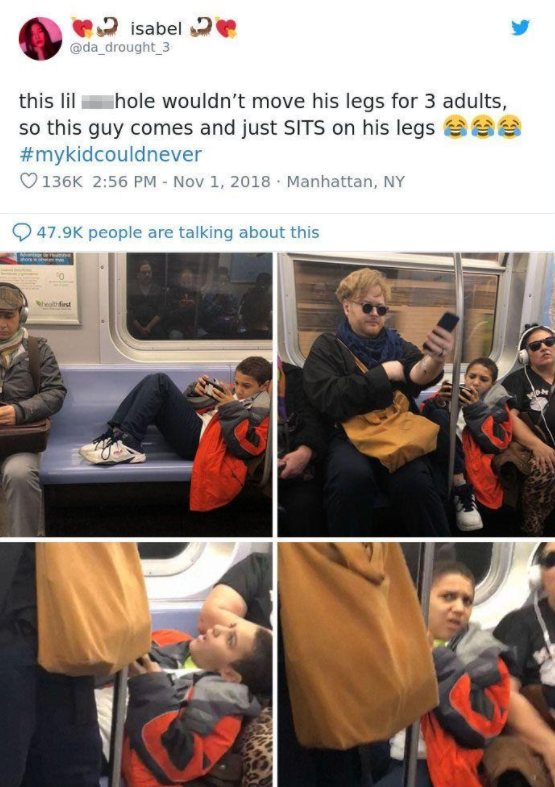 You’d find that most kids respect others, but there are some who are quite rude owing to the way they get their upbringing. It seems they couldn’t care less about others.

This kid seems to be one such kid. You can put blame on the internet and lack of common sense in this generation’s kids all you want. In this scenario, the kid was just being rude by denying seating to other people on a train.

No one wanted to confront this kid until this man walked up. After asking the kid to move and free up space, this man simply sat on the kid’s legs when the latter refused! We hope this lesson will help the kid learn a thing or two about respecting others around him.

Karma is unforgiving and will not rest until it does what it does best – deliver justice. It doesn’t tolerate people who keep misbehaving with others, and it certainly doesn’t tolerate those who threaten other people’s lives.

This driver was having the time of his life threatening everyone’s life with his rash driving on the road, but his trickery faded all too soon when his car got stuck on the traffic barrier on the side of the road! This usually happens to those drivers who think they can make others’ lives miserable without anything happening to them.

There are logical reasons why we have road rules, and if everyone started behaving like this guy in this gif, there would be chaos with accidents all around. So, please follow the road rules, and drive safely.

You can watch this on loop forever. Look at how this silly man tried to play a little trick on this woman drinking water, and how quickly the tables turned.

This is hilarious on multiple levels. This woman was so taken in by the prank that she spit the drink right back at the man and began laughing.

This instant karma was much needed to teach this man to behave like an adult, and we hope it serves as a warning to others who try such pranks. Be nice to people around you!

Cats are quite unpredictable. They can be quite nice and warm one instance and turn into a prime hunter the next moment. You shouldn’t mess with a cat if you don’t like having scratch marks on your face!

This man certainly forgot that it was a cat and not some random animal when he decided to pull this prank. Come on, what was this person expecting here?

When a cat decides it doesn’t wish to go out, you can never make the cat do it. In this case, karma decided to favor the cat, so when this guy probably tried to throw the cat out in the open, he fell down himself! 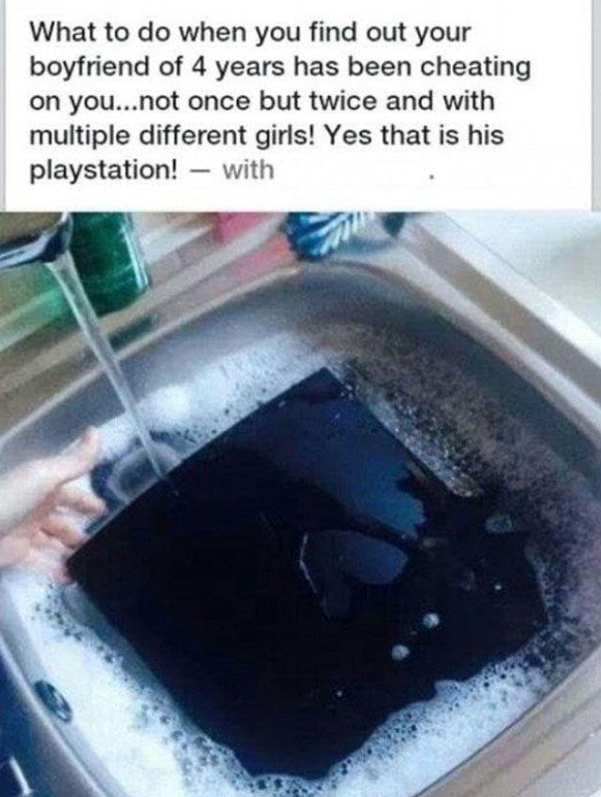 Folks that cheat on their partners are absolutely trash. They don’t realize that truth often comes out, and it hurts their partner like nothing else.

Obviously, it all goes ballistic when a woman finds out that was cheated on by her boyfriend.

This girl was cheated on more than one time, and this girl simply had enough by the second time.

She was hurt and angry at the cheating. Anyone would feel the same after years of being in a relationship! She decided to use the guy’s PlayStation to take her own revenge. While it certainly hurts to see that PlayStation float in the water, this lady did the right thing!

People pushing others in cold water is probably not the most pleasing thing to do to anyone.

This guy tried to pull a prank on this woman, thinking it will all end up in a laugh for everyone involved. Little did he know what was coming for him.

Instead of succeeding with his mischievous little plan, the guy was thrown into the cold water himself! All credit to the lady here, who performed the most amazing move, using the guy’s momentum to throw him into the pond.