The Internet is easily the most important technological invention of the past century that helps us connect with others around the world, giving everyone a chance to be part of a large global family. Just like with everything else, it has both positives and negatives, and thanks to all the advancements that have taken place over the years, the web can be part of both good and bad.

One thing is for sure. It still gives us the chance to communicate with a large number of people that wouldn’t simply be possible otherwise. What about grannies and grandpas, though? How do they use these new technologies in their everyday lives?

Well, a whole lot of older folks are quite well versed with all the advancements (surprise!), while others feel a bit bogged down by the messengers and the smartphones. When people from the latter category hit the web, they sometimes end up creating some of the most hilarious things ever! We’ve compiled a list of some of these funny moments that will make you chuckle for sure.

Sure, That Wasn’t So Rude 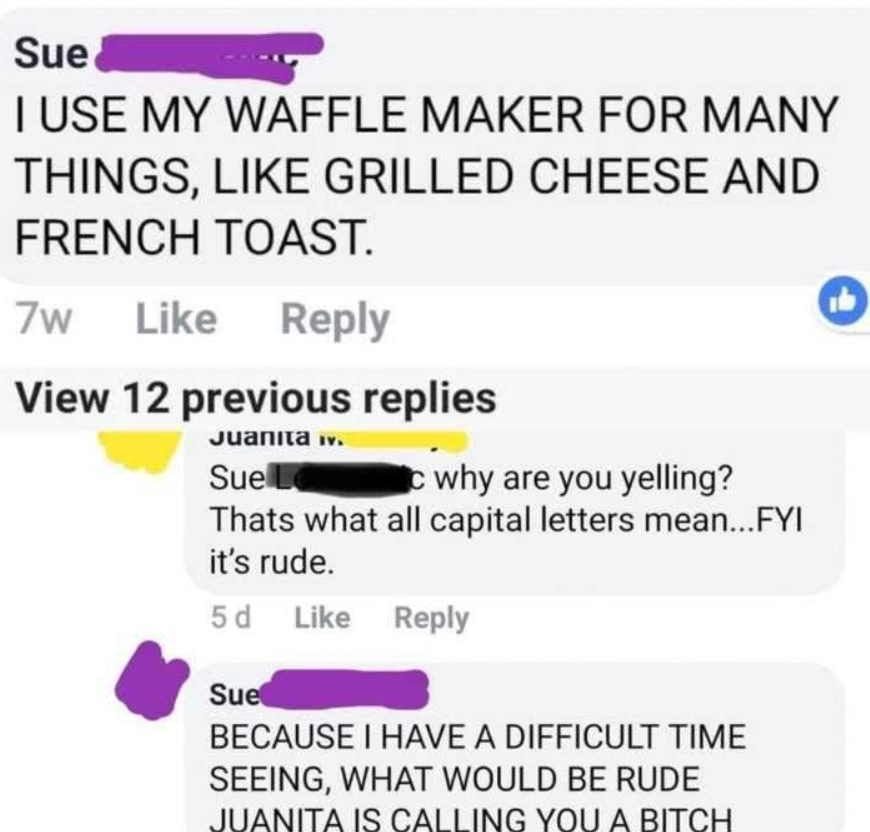 People who message on the web are expected to follow internet etiquette. You should know what different emojis signify, and which one is the laughing one and which one is the crying one. Also, you should be aware that wrong in all caps is a straight no. This old lady clearly didn’t know this.

For almost everyone using the internet, using capital letters means that the person is yelling to get his message across, or is being rude. But when it comes to the elderly, they often use it because it makes them see the letters more clearly.

Sue posted a message in all caps and a buddy thought it was nice to point out that it was rude of her to do that. Well, Sue simply explained what rudeness really is, and we can’t help but agree with Sue that capital letters aren’t that bad! 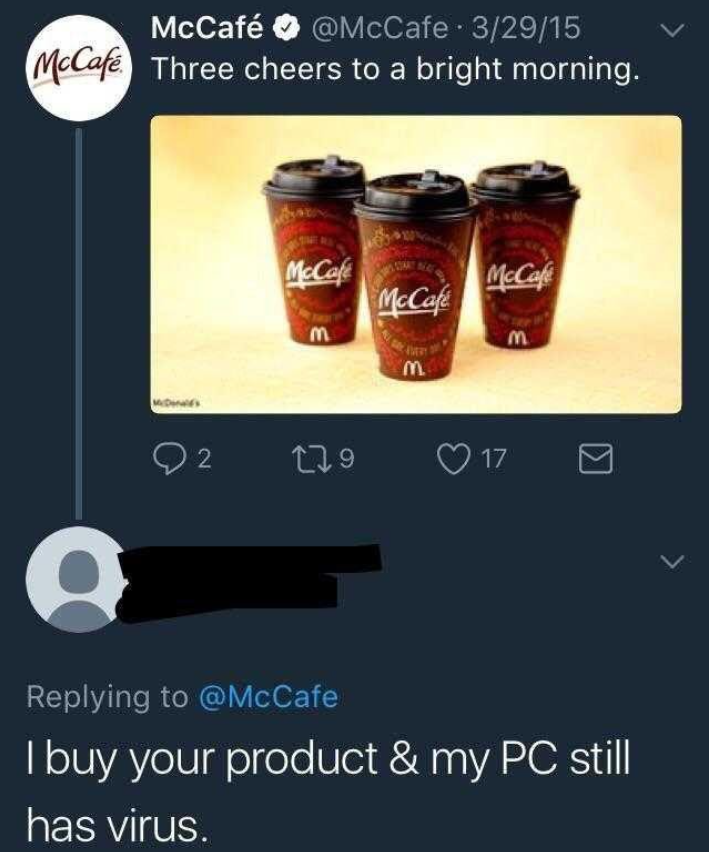 We cannot blame anyone who confuses McAfee with McCafe, as the two sound so similar. This user clearly wasn’t pleased with the McAfee antivirus software he purchased, so he decided to complain about it.

He logged onto his Twitter account and found McCafe instead of McAfee to complain about the product – a different company that deals with cakes and hot beverages, but not viruses for sure!

We certainly hope someone found this mistake and helped him find the right company. As for McCafe customer support, that would have been a funny situation for sure! 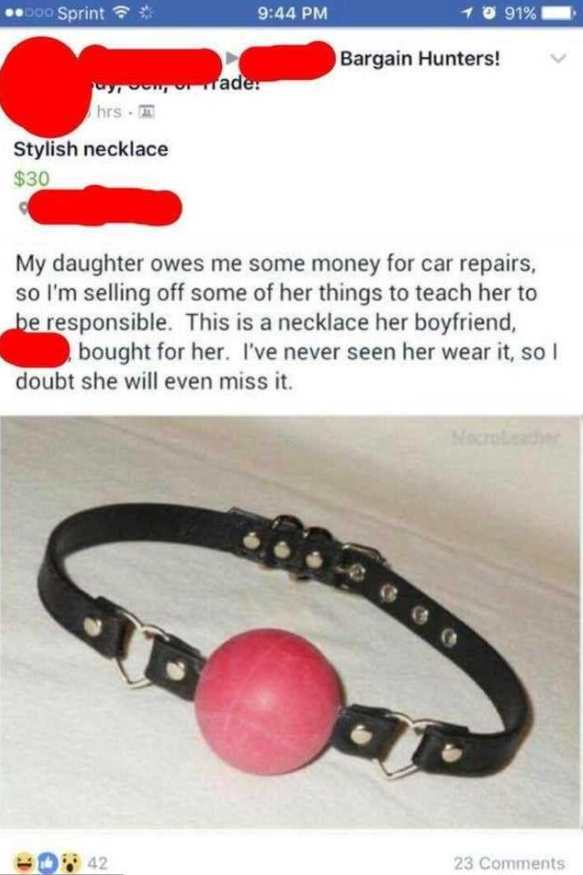 Selling something you rarely use isn’t really a bad idea, as it lets you have some extra cash. In this scenario, though, it all went horribly wrong when a mom thought it was a good idea to teach her daughter a lesson by selling what she believed was her ‘necklace’.

The daughter earlier caused damage to her car and wasn’t willing to cover for the damages, so her mother was trying to find an item that she could use to sell in order to cover the repairs.

Well, she ultimately did find something and put that up on sale but didn’t have a clue of what it was.

Well, judging by all the ‘shocked’ and ‘smiley’ emojis people used, we bet most of them knew what the ‘necklace’ actually was. We are sure the mom will soon find out about her daughter’s necklace and will have a really long and tough talk with her adult daughter. We certainly do not wish to be in their shoes! 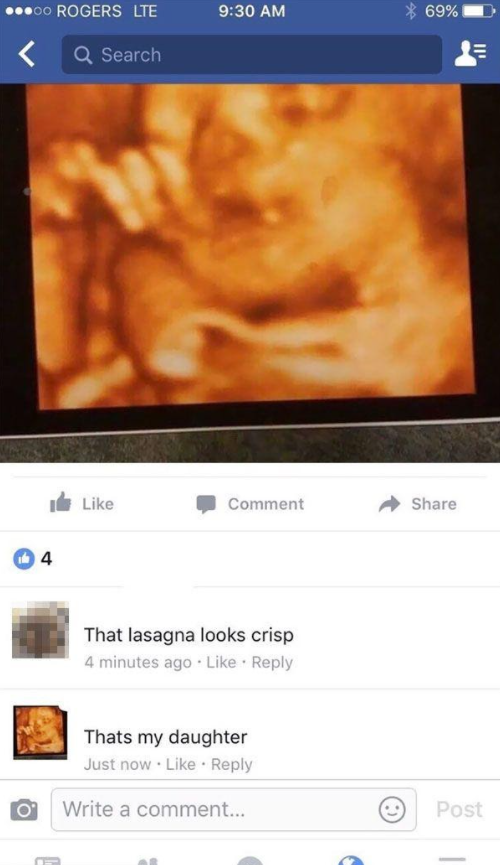 We all know how eyesight gets worse with old age. Well, it can at times get really bad just like this gentleman, who mistook a photo of an ultrasound with a picture of lasagna!

Honestly, one cannot blame the elderly gentleman entirely for this faux pas – this photo does give a mixed impression of what exactly it is! It is difficult to ascertain what the photo is about without having some background info.

But since the mother in the comments has made it clear for us, we can have a laugh at this funny situation. It is weird and hilarious at the same time!

Get A Life, Lady 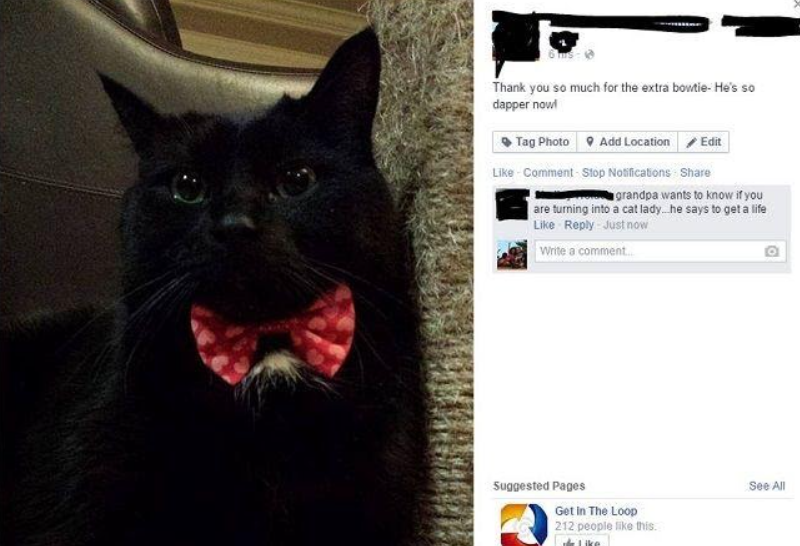 These days, having a cat very well means you can be an Insta star – or at least have a few like-minded friends on the platform. This wasn’t the case a few decades ago when people treated cat owners like they had no interests or interactions in their life.

Well, obviously that cannot be true, so this person’s grandpa’s comment clearly made us chuckle. He sure gives good advice – or at least he thinks so! 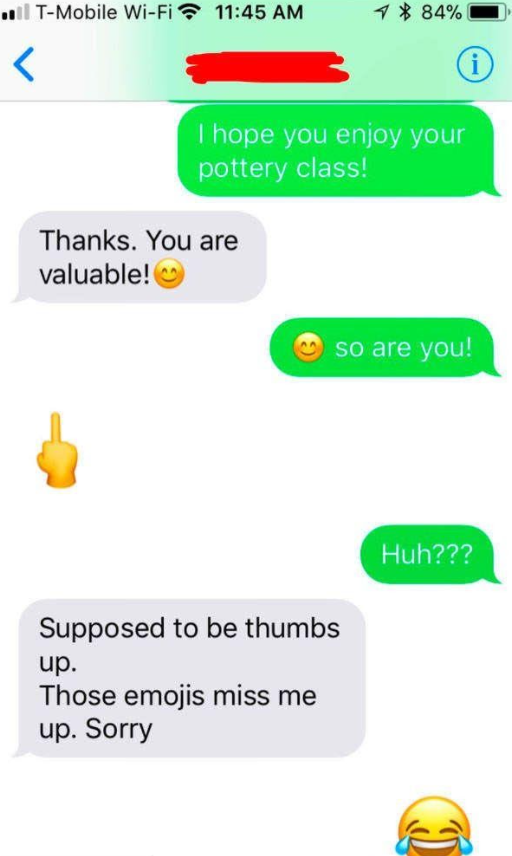 Chatting with older people can be really difficult, and things could go wrong at any second. Even typing simple things can be difficult for older folks, especially the highly ‘advanced’ things such as emojis!

We can see a sweet conversation between a child and his grandmother when things go south really fast when the old lady uses an entirely different emoji than she wanted to. It was completely not required, and that makes it all the more hilarious.

We see the two of them had a great laugh about it! But one thing is for sure, knowing what each emoji means is extremely crucial! 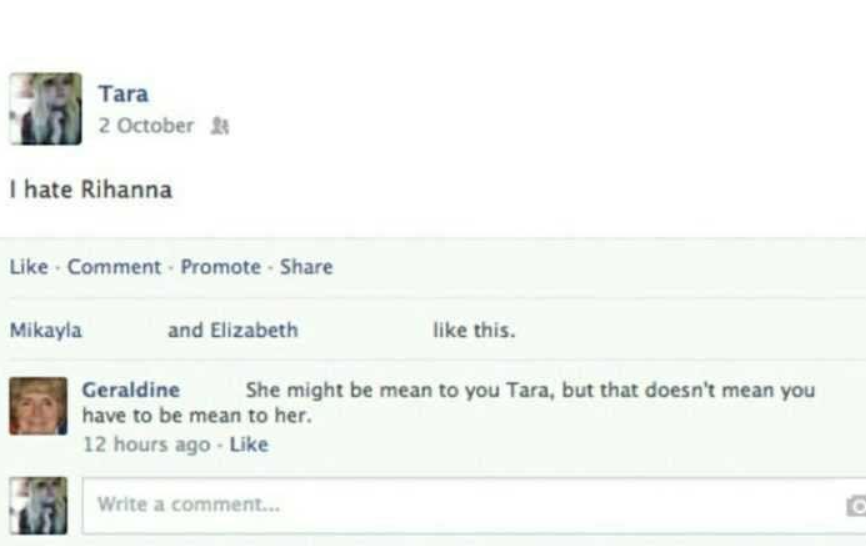 Teens easily take things on a personal level and fight for their favorite singers and stars as if the pop stars are not strangers but their friends instead. Well, it is completely normal and common, and most people tend to brush these things off. Not this elderly relative, though.

Clearly, the old lady didn’t have a clue about who Rihanna was or why Tara was upset with her.

She figured Tara was feeling bad because of a real friend of hers and gave her a nice piece of advice! Well, regardless of the fact that they aren’t buddies, that was solid advice right there!

It is fine if one doesn’t recognize all the latest pop stars and the musical bands – there are hell lot of them anyway, with new ones making it big every year and adding to that list. Regardless, this old lady’s wisdom is precious!

No Fan Of The Social Media 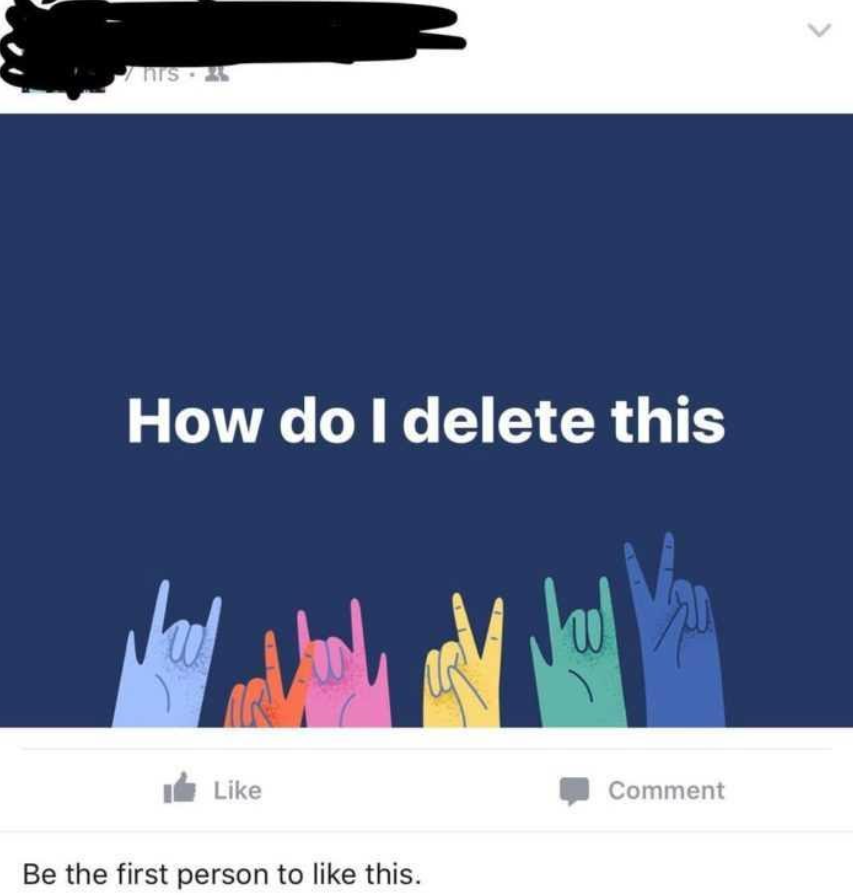 Social media can be at times confusing even for normal users, so obviously, the elderly find it a tad difficult to surf through various settings and add-ons.

In such a scenario, asking for someone’s assistance is the cleverest thing one can do as you don’t want to be entangled with all the witchery social media has! This particular user decided to just hit delete on the whole platform!

Way Too Much Information 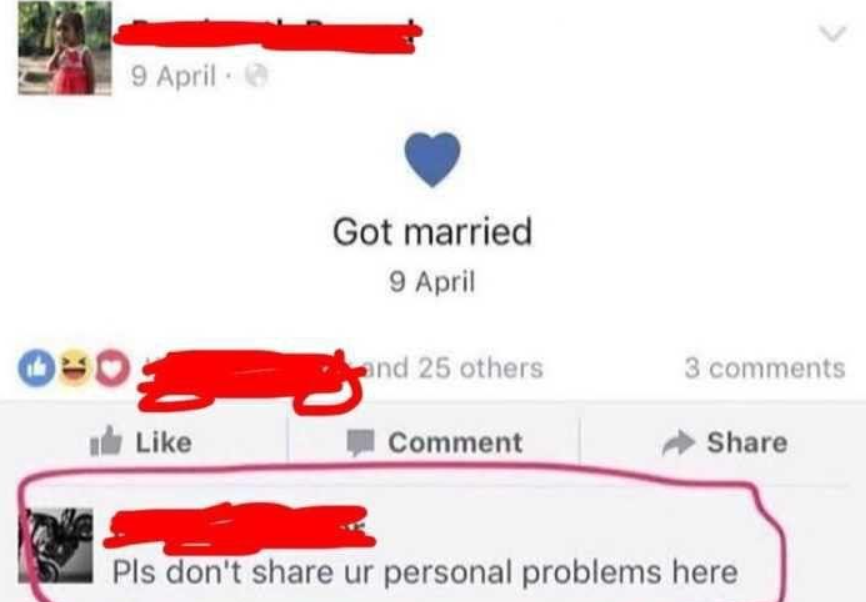 It seems most people use social media sites like Facebook to just inform the entire user base about the stuff they do every day. Some simply post unique moments of their lives they think others would like to know about, some go on to share every trivial detail concerning their day-to-day life, including the places they visit and things they like to eat!

We think this man right here isn’t too pleased about this social media post. He thinks he can do better with knowing less about people around him.

Is the man overreacting? It is certainly one thing to post each of your daily activities and quite the other thing to let your Facebook friends know about important moments in one’s life, like marriage. Apparently, this man thinks marriage is a ‘problem’ the fewer people know about the better!

Marriage Teaches You To Obey 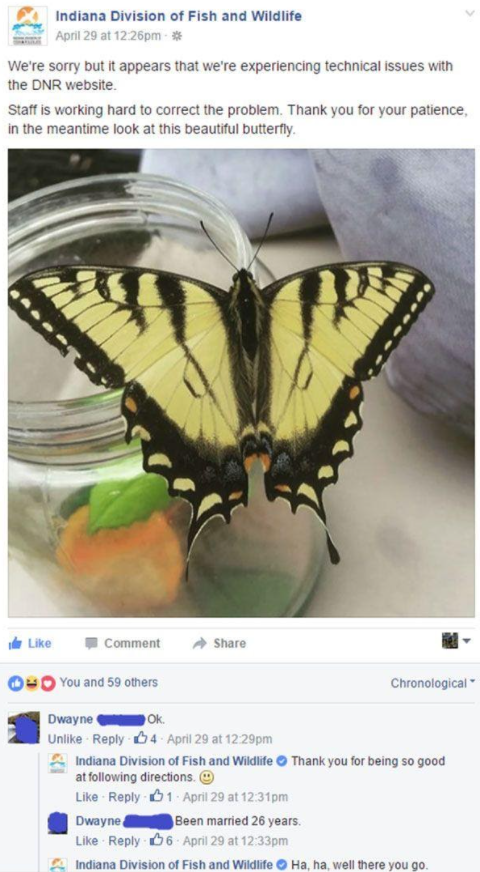 People and organizations often post general posts on social media platforms to inform people about certain things, but they do not really expect a response for the same. This old man decided to post a comment on such a post nonetheless.

This message seemed important to this gentleman so he decided it was a good idea to respond to the Indiana Division of Fish and Wildlife promptly. The chat quickly became a meme fest!

Well, it seems like twenty-six years of marriage teaches you a lot of things, one of them being obedience. We got you, Dwayne!