Over The Top Extravagant Celebrity Weddings – Life Of The Rich

Everyone estimates the costs of marriage and plans a lot before spending the money, but rich and famous people have no concerns about money. They spend on their weddings because they believe in spending limitlessly and making their weddings the most memorable and extravagant events of their lives.

In fact, the famous and rich celebrities celebrate their weddings in beautiful venues that just look like diamond castles with a lot of decorations. The wedding dresses cost millions of dollars and even the single diamond engagement ring is worth millions of dollars because the couple has to love it for years to come. It is no secret that diamond rings can never be inexpensive but when it comes to choosing the best one, celebrities do not afford to pay less.

Today, we will talk about the celebrity weddings that broke all the records and made new ones such as one celebrity bride who had a wedding gown that was worth $3.5 million.

Well, we know that you cannot guess that couple, so we are going to connect you with some million-dollar wedding couples. 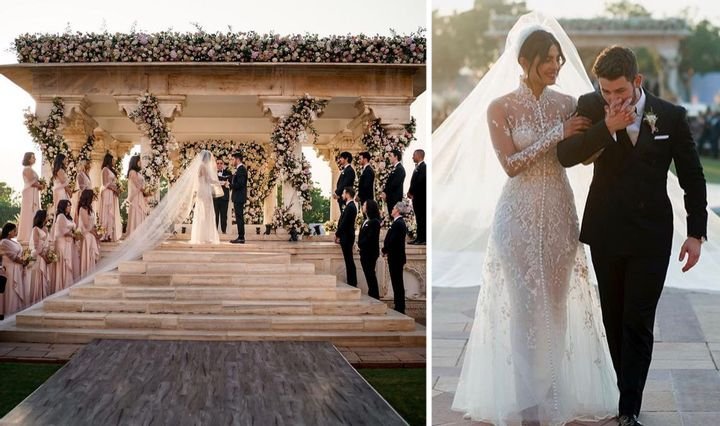 This superhit couple got engaged in 2018. It was a surprising event for the Bollywood industry. Keep in mind that it is a very rare practice for a Bollywood actress to marry a White man.

This couple was highly appreciated in Asia and their wedding continued for five days in which two wedding ceremonies were arranged. It was one of the most extravagant weddings of Bollywood celebrities.

According to E! News, the total expense of this multi-day wedding was more than $800000.

The most interesting part of this wedding was the wide range of bright dresses that she wore as the perfect representation of Asian and Western culture. One of her dresses was a custom-made Ralph Lauren gown which took more than 1800 hours in its designing, embellishment, and embroidery.

The royal beauty of this dress can be realized from the fact that its veil was alone 75 feet long.

When it comes to British Royalty and the celebration of amazing British couple weddings, we cannot ignore the fantastic wedding event of David and Victoria Beckham that was held in July 1999.

Their wedding was arranged at Luttrellstown Castle which was adorned with silver birch trees and rose petals.

Want to know the most shocking part of this wedding?

Only 29 guests were invited at the time of “I dos” while the lavish reception had only 230 guests.

According to the BBC, the total cost of the wedding was $800,000, while Victoria’s dress alone accounted for $100,000. The other expenses on the bride’s dress include an 18k-gold tiara and a 20 ft long veil.

This superhit Hollywood couple had the biggest celebrity wedding. It was truly a million-dollar wedding in which the overall costs were more than $1 million and the money was lavishly and extravagantly spent.

Are you excited to know what this amazing million-dollar wedding included?

The wedding was arranged near the Pacific Ocean at the remarkable venue known as Malibu Wedding Venue. The natural beauty, beautiful scenery, and breathtaking views cost the couple more than $500,000.

The beauty was further intensified by the remarkable flower arrangements that included 50,000 roses, lotus flowers, and other flower species that turned the whole venue into a beautiful Zen garden near the ocean.

The reception was a series of interesting events including the concert of Melissa Etheridge, a fireworks show, a lobster meal, and much more.

Well, it was a wedding ceremony of two men which was arranged in Windsor in December 2014. The most prominent aspect of this marriage was luxury drinks including Pouilly fume 2009.

Other rich couples were also invited to this ceremony including David and Victoria Beckham.

It is no secret that it is the Hollywood power couple whose wedding event was arranged at New York’s Plaza hotel.

According to authentic reports, the gown of the Zeta Jones was worth 140 thousand dollars while the total cost of the wedding was 1.5 dollars. 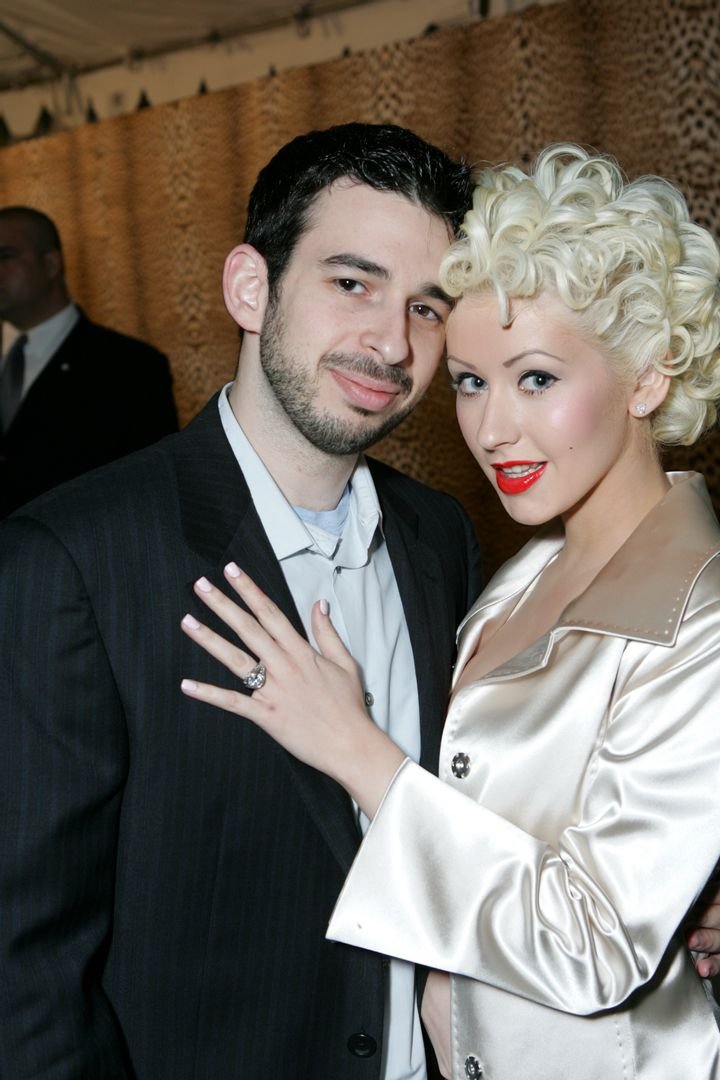 The marriage of the Music executive and a pop star was a big surprise for the fans of both.

Forbes reported that their wedding party was a complete Winter Wonderland-themed party which was worth more than 2 million dollars.

It was a truly luxurious wedding party in which floral counter pieces, chandeliers, and birch trees rocked the venue. 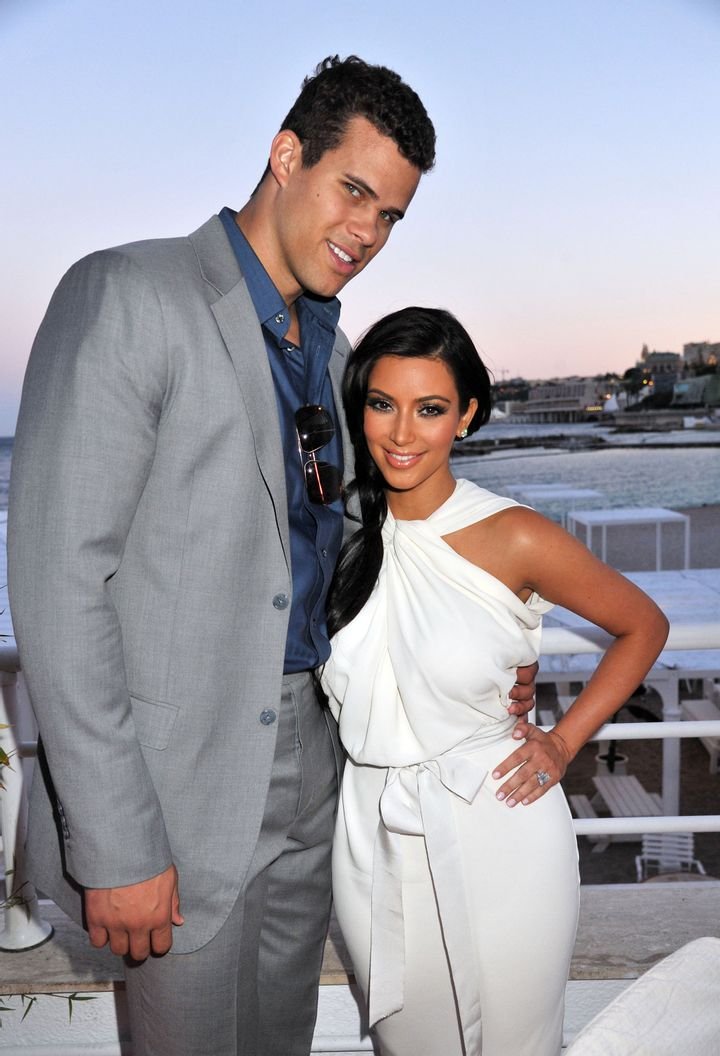 This couple, also known as Kimye, tied the knot in May 2014. The luxury and extravagance of this wedding can be understood from the fact that Kanye proposed to Kim with a 15 carat Lorraine Schwartz ring.

The trend of giving rings and diamond rings at engagement and wedding parties is something that works for almost every couple.

The ring is something that she will like even after the next 50 years. In other words, the love associated with beautiful and high-quality diamond rings is the best gift ever that will look completely flawless.

So the ring that Kanye gave to Kim was worth thousands of dollars and their wedding cost was also around $2.8 million. Another important event of the wedding that grabbed the attention of media authorities was a seven-foot-tall wedding cake which cost around $7000.

The beautiful gown that Kim Kardashian wore at her marriage ceremony was entirely custom made and its price was $136,000.

According to E! Online, the marriage ceremony of Tom Cruise and Katie Holmes took place in the historical 15-century Odescalchi Castle that was situated in Italy outside Rome.

At this luxurious wedding, no expense was spared and Katie wore various ceremony dresses that were decorated and embellished with Swarovski crystals. The decoration of the veil was also stunning and took more than 70 hours.

The wedding ceremony continued throughout the night and firework was the prominent event in it.

This is perhaps the most luxurious and the most memorable wedding of all. The reasons are quite obvious.

First of all, Michael Jackson and Elizabeth Taylor were invited to this party whose performances totally rocked the event.

Moreover, the total expenditure on this wedding was more than the money spent on weddings of various other celebrities.

The total cost of this 2002 wedding is estimated to be about $3.5 million. The extravagance of this wedding can be realized from the fact that the flower arrangements alone cost more than $700000.

The wedding ceremony of the most successful and dashing Hollywood bachelor George Clooney with Amal Alamuddin is a huge millionaire wedding event that cost around $5 million.

The event continued for 3 days and $3 million alone was spent on paying the rent of the Cipriani hotel.

The whole arrangement of the wedding ceremony was quite traditional and the menu included vodka and tequila. $300,000 were spent on table arrangements for more than a hundred people.

This couple was quite popular even before the wedding and continued to date for more than five years.

The luxuriousness of their wedding ceremony shocked everyone because it was an over 6-million-dollar wedding that took place in October 2012 in Italy.

Where had they spent the money? What did they do at the wedding that cost them millions of dollars?

He said that the marriage ceremony continued for 5-7 days and the couple booked the whole hotel because all the guests had to stay there and the couple had to foot the bill for all of them.

The beautiful personality of the actress and model Kate Upton is never hidden from anyone. The Fame and popularity of Houston Astros pitcher Justin Verlander are also evident.

This couple decided to celebrate their wedding event at Rosewood Castiglion del Bosco in Italy.

The couple arranged a mysterious greenhouse for the reception and the guests were invited to enter the historic medieval castle ruins.

Basically, all the arrangements were inspired by the Tuscany Venue. Kate’s Valentino dress was also designed with the help of Tuscany Venue designers.

Everyone is aware of the great wedding of football player Eric Johnson and the singer and actress Jessica. It is a very energetic young couple who had a million-dollar affair and the wedding was also a million-dollar wedding that cost more than 1.5 million dollars.

The interesting aspect of this wedding party was that the menu was quite simple and even without alcohol. However, the most expenditure came from the highly luxurious dressing of Jessica and the very expensive jewels that alone cost around $750,000.

If you are also looking for the best prices of diamond rings we recommend you to purchase them in the summer months because it is a slow sales time and you can confidently negotiate about prices.

The exciting aspect of this black event was that it was inspired by the 1920 Great Gatsby theme. The menu was quite delicious including goat cheese napoleons along with the herb-crusted lamb.

This gorgeous and glamorous couple had highly extravagant and extremely beautiful wedding outfits. They tied the knot in 2012 in California and the total cost of their wedding is estimated to be around $1 million.

More than $100,000 was spent on flowers and only 150 guests were invited. Basically, only close friends and family members were invited to the party. The party was totally nature-inspired and the red roses created beautiful and romantic scenery.

The couple tried their best to keep the event romantic, simple and short. So they did not spend on expensive jewelry and diamonds. 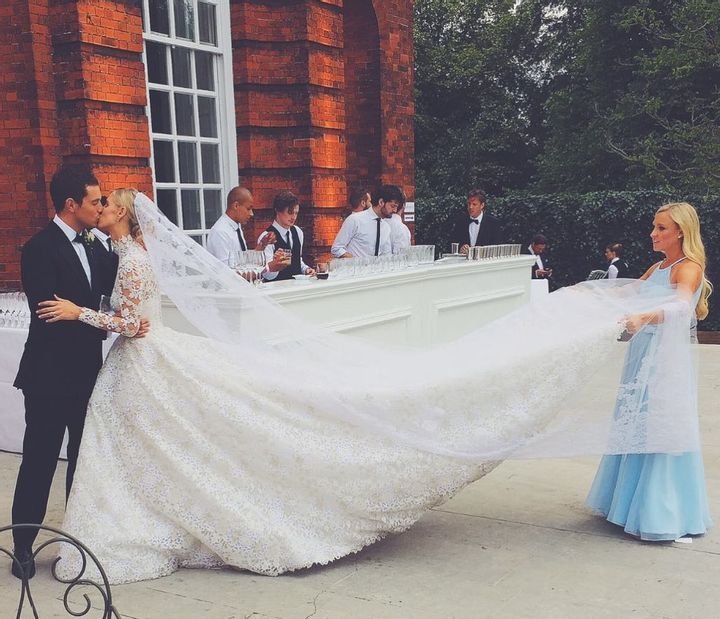 Their three-day wedding was also a millionaire wedding ceremony and they spent more than 1.6 million dollars. Only 140 guests were invited which included Stella McCartney, John Galliano, and supermodel Naomi Campbell.

Arun Nayar is an Indian millionaire and Elizabeth Hurley is a Bollywood actress. both married together and definitely, money did not come in their way. They arranged two events like their wedding ceremonies and the total expenditure was $2.5 million.

Do you also want to make your wedding ceremony as memorable as a millionaire wedding?

Well, you can also rock your wedding event by presenting a beautiful diamond ring to your partner.

For this purpose, you can choose an affordable look by keeping the metal weight down and using a simple prong setting.

It is better to purchase the diamond ring online because online local jewelry stores have a huge variety of diamond rings along with a money-back guarantee. Moreover, they keep on providing various discount offers and online prices often allow you to save at least 15 to 20 percent.

Buy a diamond ring with a diamond speck that is smaller than normal. In this way, you will be able to save around $1000. A very slight difference is often negligible but it turns out to be a cost-effective option.