12 Times Celebrities Got Their Photos Photoshopped To Look Less Muscular

Celebrities want to look the best they can – all the time – and Photoshop often comes to their aid in this regard most of the times. Whether it’s removing the cellulite from the body or getting a slimmer tummy and blemish-free, shining skin, celebs have often been called out for using Photoshop to make their pictures transform them from supermodels to straight away superhumans!

However, a strange phenomenon has been taking place for the last few years or so. Celebs are now opting for airbrushing to make their bodies look bigger and less muscular in the pictures! Editors of some of the leading magazines have admitted in private that since models do end up looking underweight most of the time because of the industry demands, the editors don’t shy away from using Photoshop to make their bodies look “fuller” and “healthier”.

In this article, we’ve compiled a list of celebs who’ve got their images airbrushed to look less muscular than they really are. Let’s check out the list now. 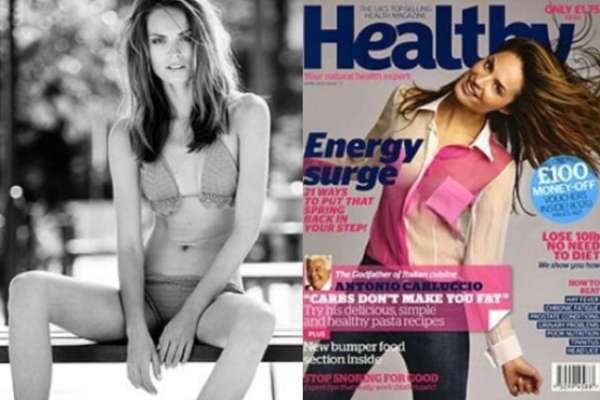 When Kamila Wladyka posed for the Healthy magazine, we bet even she wasn’t expecting to end up looking so different on the magazine cover. She was made to look at least 30 pounds “healthier” than she actually is. When the editor of the magazine, Druker, was asked about it, she defended her decision by saying that since Kamilla showed up on the day of photoshoot looking “unwell and thin”, they had to airbrush the photos. 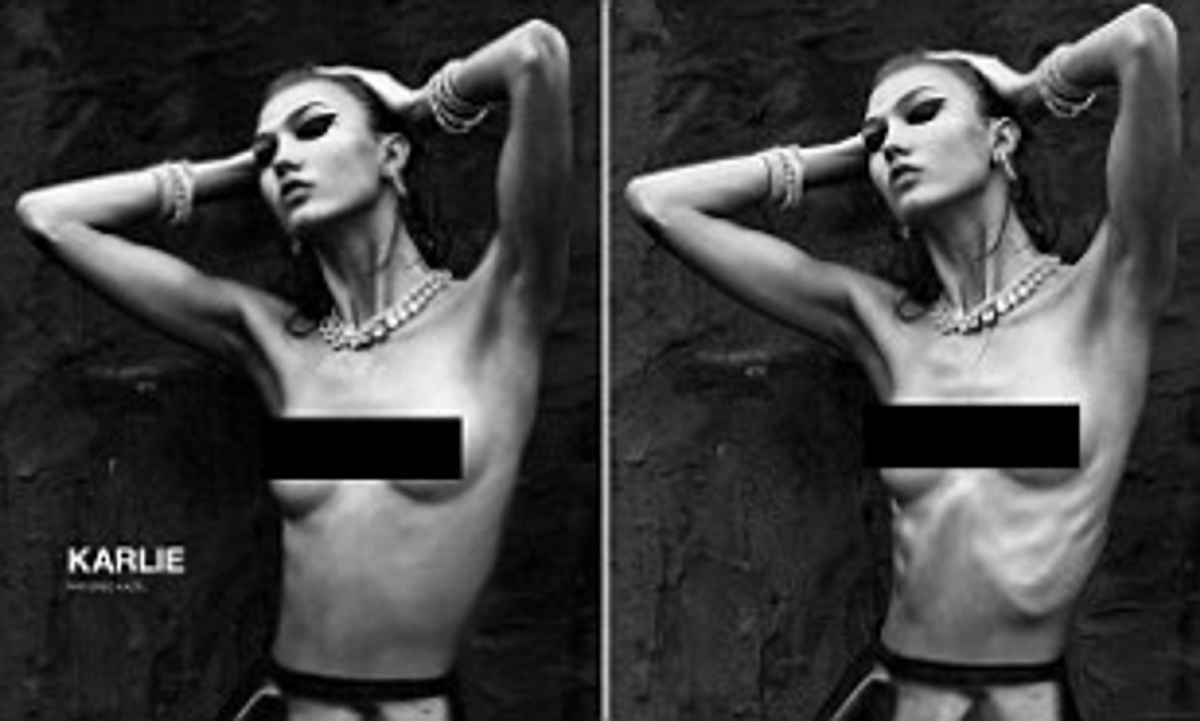 Karlie Kloss, the supermodel had a rib removal surgery – or at least that’s what we can infer from this photo of hers. If being thin is really in vogue, why did the editors remove her bone structure from the photo?

Jenna Sauers, a model, and blogger has a good explanation of why this happens in the fashion industry. According to her, audiences (and she blames the industry for that) have become very used to seeing really thin, apparently boneless girls in the magazines, which drives the editors to use Photoshop to get the desired photos. 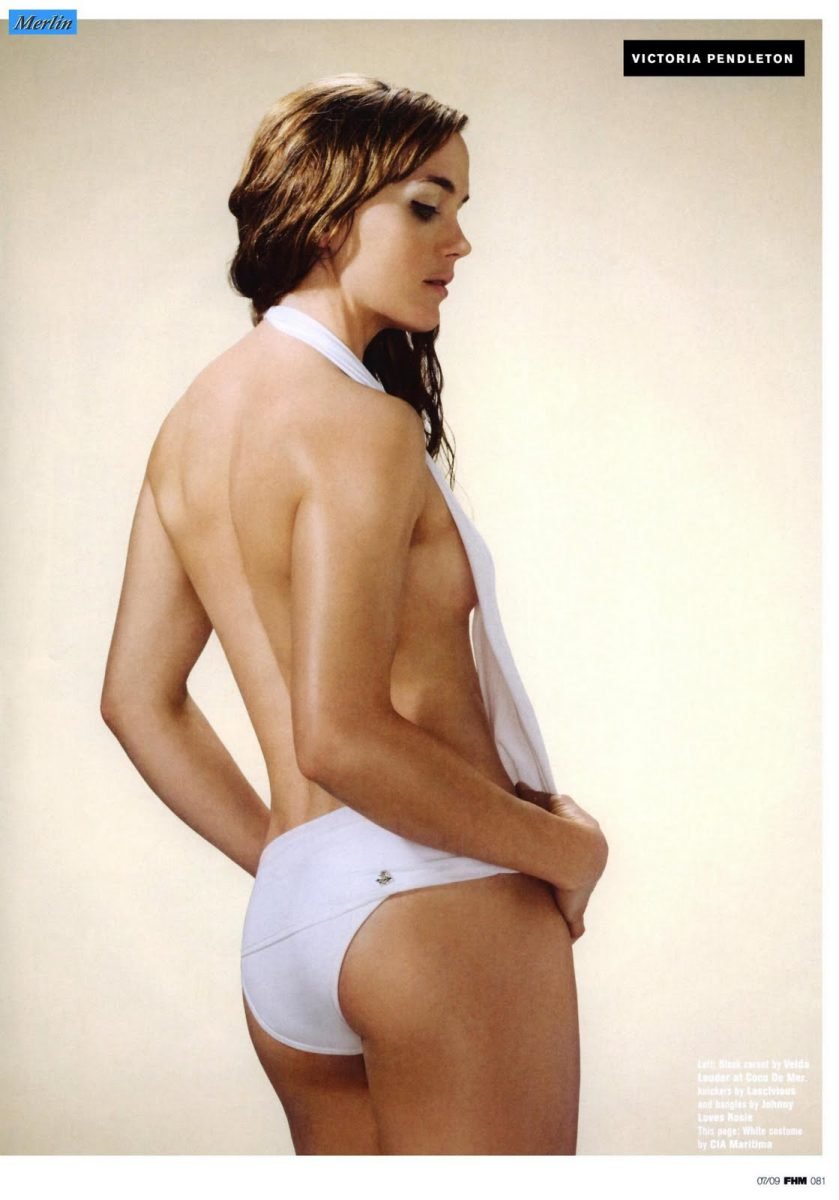 When Victoria Pendleton posed for one of the magazines, the editors airbrushed her back in order to make it “less muscly”.

The beauty accepted in a column she wrote for Zest that she was indeed disappointed by that decision. She shared that when she saw the photos on the day of the photoshoot, she felt proud of her back muscles, but when the magazine made her back look smoother and “less muscly”, she did end up feeling bad about it. She said: “when the picture was printed, my back was smooth and practically muscle free. They’d softened it all, and I was so disappointed because I’d put a lot of work into that! I guess, in their opinion, being muscly isn’t that attractive in a woman. But surely if you take a picture of an athlete, you’d expect to see some muscle, wouldn’t you?”

Well, we totally agree with you, Victoria. 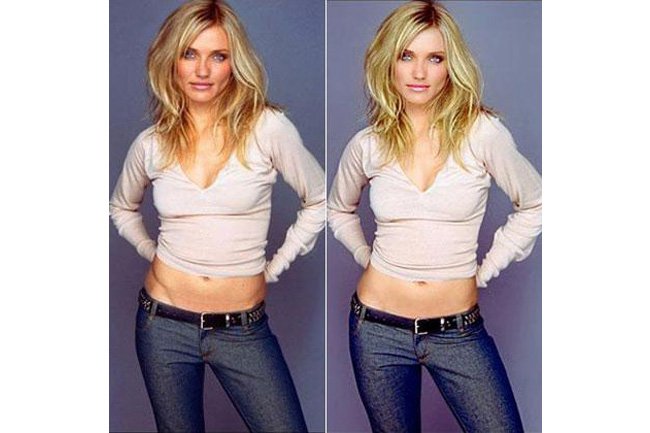 Cameron Diaz has always been appreciated for her curves, but she has put on a leaner and more athletic look over the last few years. And photographers and editors don’t really care about that – as long as they are allowed to airbrush the photos to make her look a certain way. In this image, we can notice how the editor airbrushed the abdominal “v-cuts”, as it makes her look more muscular. 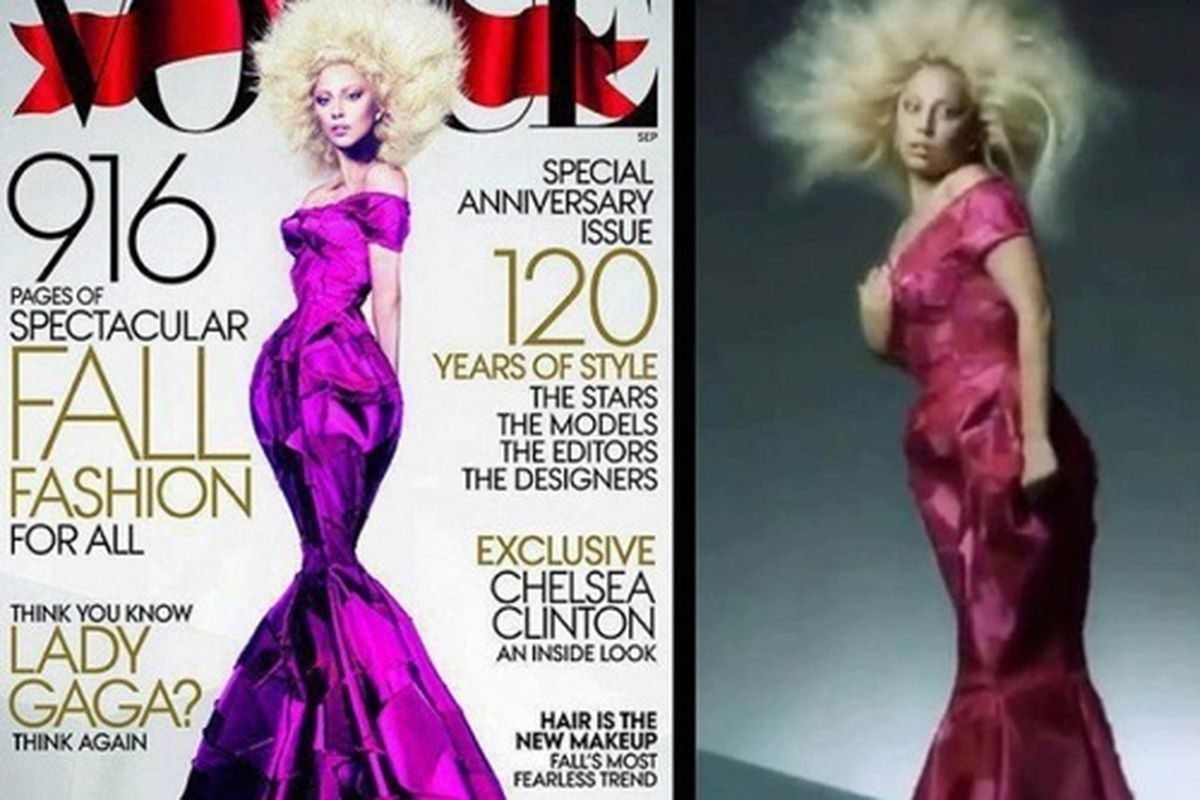 As if Lady Gaga already doesn’t look spectacular, the Vogue magazine decided to Photoshop her photograph for their magazine cover by altering her hips and boobs to really new levels!

When behind the scenes photos from the shoot were released, people were left wondering why the magazine did that to her already perfect photos. Amy O’Dell, who works at Buzzfeed, was right to point out that there wasn’t any point in having original photoshoots if the magazines are going to use only a “photo illustration” in the end. We agree!

However, Lady Gaga wasn’t upset with the pictures at all. In fact, she was happy, and she tweeted: “Aah, the Vogue Express dropped off the September issue yesterday morning! I’m a covergirl and it’s fab! Can’t wait to show u tonight!” 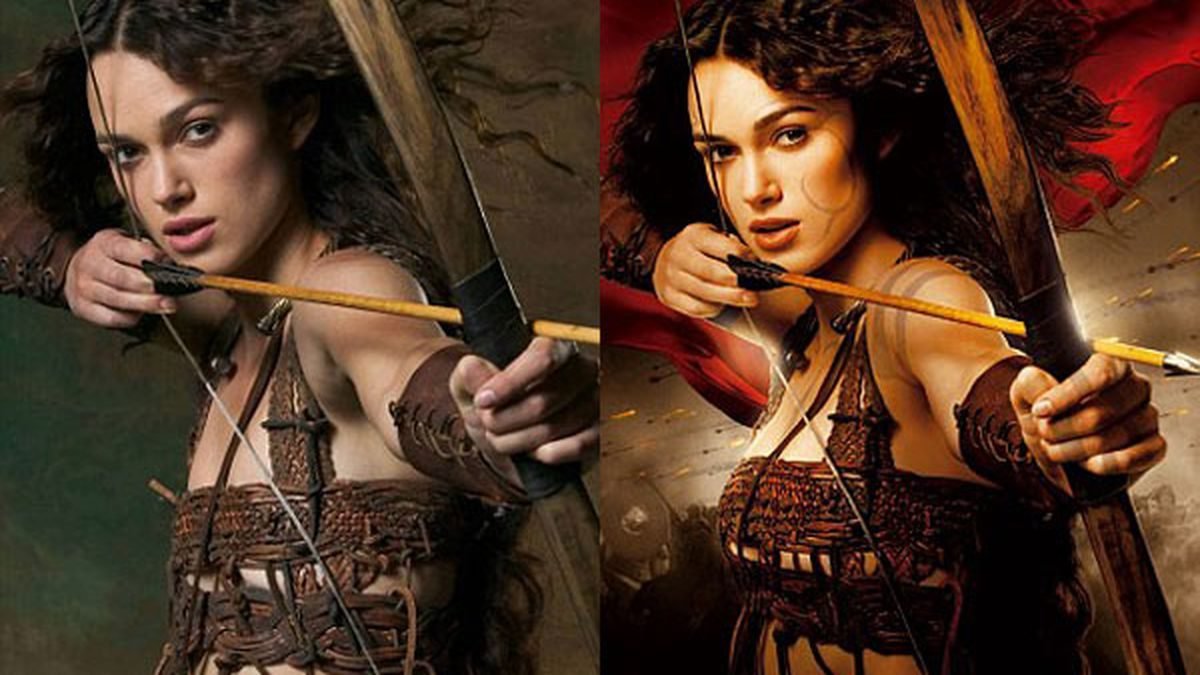 Keira Knightley was in for a shock when she saw her poster for the King Arthur movie. The actress had more volume, especially on her arms and bust, which make her look starkly different from how she really is. She let her displeasure known to the marketing team and seems like she has learned her lesson since then.

For the latest flick The Duchess, she has asked the makers to let her body be and look as it is. An insider revealed that she is very confident about how she looks and doesn’t want any airbrushing done. 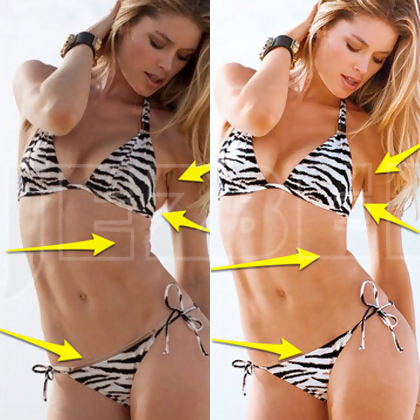 If you thought that lingerie models don’t get their photos airbrushed, you’re entirely wrong. For a Victoria Secret’s swim shoot edition, the abs and pectoral muscles of Doutzen Kroes were made to look smooth and more “feminine”. 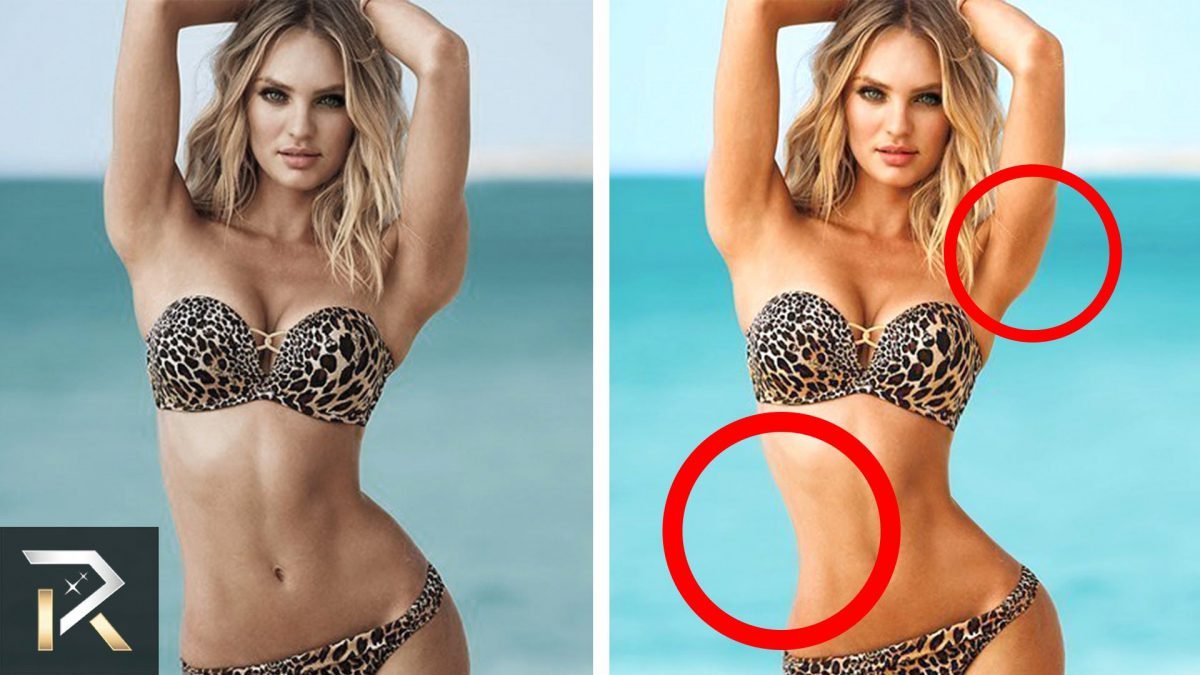 Another famous Victoria Secret model, Candice Swanepoel received the same treatment that Doutzen Kroes did when the editors decided to Photoshop her abs and hips areas. 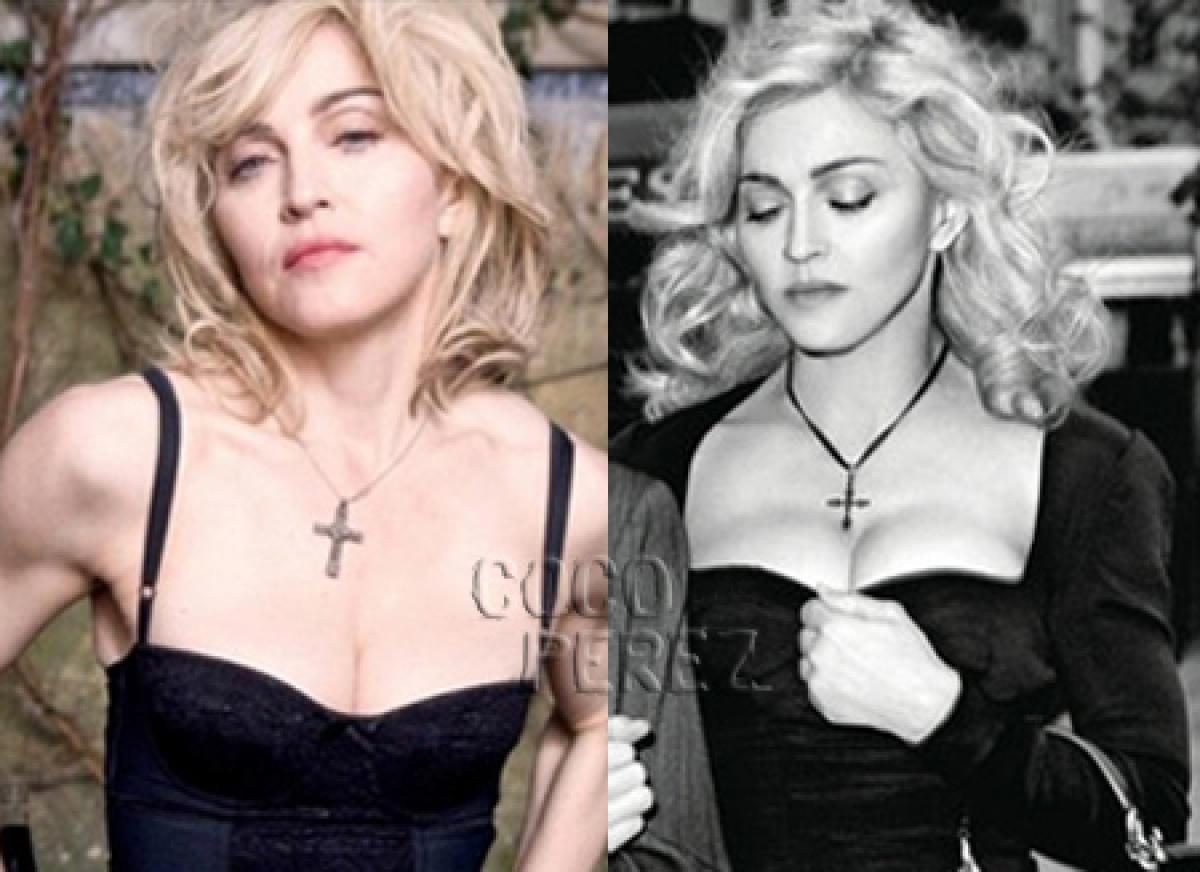 This Pop Queen has defied aging with the help of high-intensity workout coupled with highly nutritious diet. However, clearly her strength training results weren’t a thing to be proud of according to Dolce and Gabbana, a leading fashion name that made an ad with the Queen of Pop.

In this picture, we can see how their editors smoothened out the muscular tone of Madonna’s arms, while also removing the vascularity. 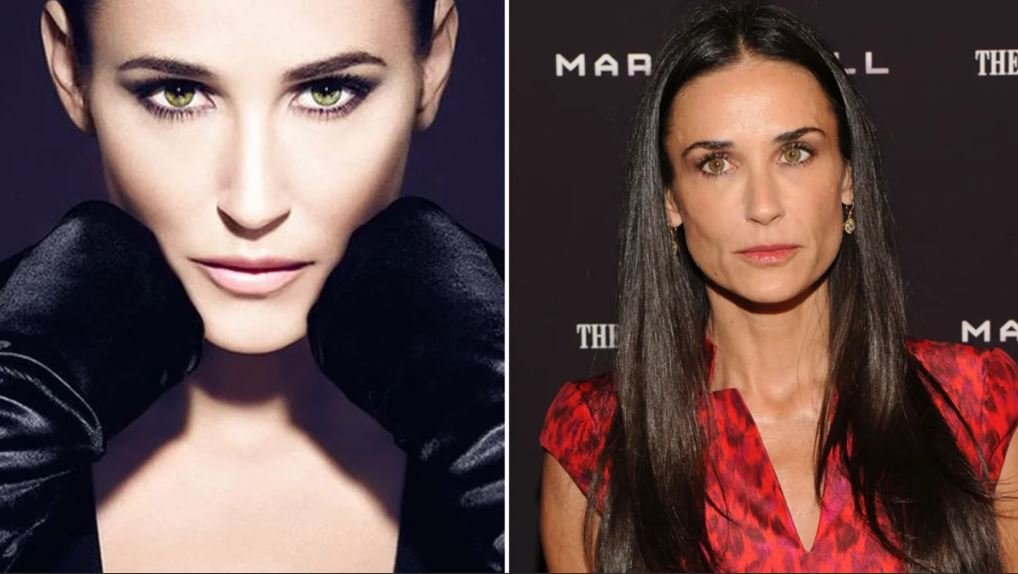 Demi Moore has made the headlines for all the wrong reasons many times in the past. From her nude pregnancy posters for the Vanity Fair magazine to epic Photoshop fail when her hip was removed from W magazine cover, she’s faced it all before.

This time, her chest and collar bones have been removed for a cosmetics campaign she did for Helen Rubenstein. The only explanation people close to her came out with was that after her breakup with Ashton Kutcher, she ended up losing a lot of weight that made her look way too skinny. 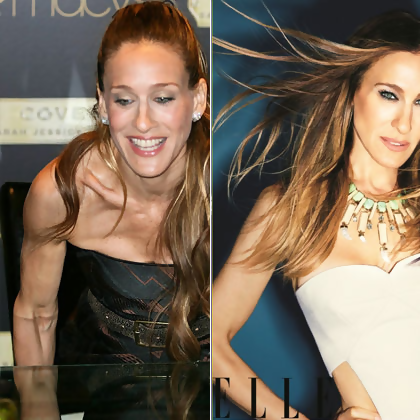 People are always fascinated with the fashion sense of this Sex and the City star. The actress has transformed herself and looks more athletic now, but it seems those muscles aren’t really nice for the magazines, after all.

For a recent Elle magazine cover, the editors used Photoshop to remove the arm definition the actress has and made them look smoother. 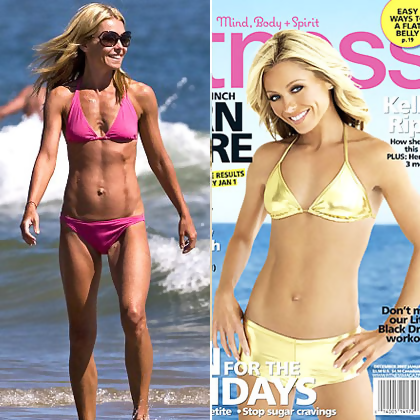 A talk show host and someone who has twice featured on the cover of SHAPE, even she wasn’t immune to airbrushing, it seems.

In a bikini shoot for Fitness, much of her muscle definition was removed and her body was made to look smooth. If that wasn’t enough, they even changed her bellybutton!